Illuminations USA owner, Steve Riggs is proud to announce his company’s recognition as Light Pro Contractor of the Year for 2012, and celebrates with a new website redesign. 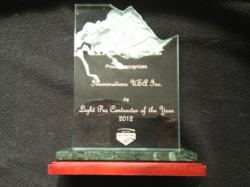 I had no idea I would be getting this award. We were on a company trip where they were handing them out and I heard my name get called; I had no idea. We’re a little company, but I guess we’re doing alright!

Steve Riggs, owner of elite outdoor lighting company, Illuminations USA, is proud to announce his acceptance of the 2012 Kichler Light Pro Contractor of the Year award for the southeast region. As an industry leader for light manufacturing, awards distributed by Kichler Lighting are highly sought after and in turn, their recipients are extremely respected throughout the lighting community.

This will be the sixth Light Pro Contractor award Illuminations USA has won in the last 18 years, and Riggs recalls being very shocked and humbled to have been chosen once again.

“I had no idea I would be getting this award,” said Riggs. “We were on a company trip where they were handing them out and I heard my name get called; I had no idea. We’re a little company, but I guess we’re doing alright!”

Illuminations USA has been using Kichler Lighting products since the start of their business in 1994. It is their dedication to the brand and providing clients with first-rate outdoor lighting fixtures that has earned them this award, along with Kichler’s Diamond Elite Light Pro Status.

As a means of celebrating, Illuminations USA launched its new responsive web redesign on Friday, February 22, 2013. According to Microsoft, mobile web users are expected to drastically outnumber desktop users by 2014. Staying ahead of the curve, this upgrade will allow the company’s website to recognize and adjust to any device a viewer chooses to use, giving them the best possible picture on any sized screen.

Illuminations USA is a premier provider in landscape and architectural low voltage lighting, highlighting the beauty and style of any building’s exterior. Innovative design, high quality equipment and a level of customer service that people rarely experience anymore are all at the core of what makes Illuminations USA a top-rated lighting company.

Contact Steve Riggs and Illuminations USA today for more information on architectural and landscape lighting, and visit the website today to check out what the new responsive design has to offer.