Published by BRAC in partnership with The MasterCard Foundation, a new report recommends development programs shift toward a wider, more integrated approach to youth development. 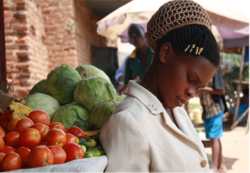 Judith Mugula of Iganga, eastern Uganda, an entrepreneur who demonstrates the potential of Uganda's youth. She is profiled in BRAC's Uganda Youth Watch report.

BRAC, a global development organization, announces the release of a major report on youth in Uganda whose findings are likely to be relevant for any developing country confronting a demographic “youth bulge.”

“Problem or Promise: Harnessing Youth Potential in Uganda,” published by BRAC Uganda in partnership with The MasterCard Foundation, an independent, Toronto-based foundation focused on youth education and microfinance, assesses the vibrancy of youth in the country with the world’s lowest median age.

For the full report on Uganda's youth: http://www.brac.net/content/uganda-youth-watch

BRAC’s internal research and evaluation unit reached out to every corner of Uganda, using focus groups, case studies, and a survey of over 5,000 people aged 15 to 30, from all settings and walks of life.

Uganda is the world’s youngest country. The median age of the population is 14, and 57% of the country’s population of 34.5 million is under the age 18. It also has the highest prevalence of poverty among its youth.

Yet despite the massive size of Uganda’s youth population, prior to this report, little was known about the experiences, perceptions and realities of a generation now negotiating a transition to adulthood under difficult circumstances.

Some of the report’s key findings:

These insights into the social and economic lives of youth in Uganda lead to recommendations for a more holistic, integrated set of youth development programs that address the multiple constraints that young people face – moving beyond, for instance, a single pronged focus on a narrow area such as vocational training.

“Difficulties securing employment are much more complex than simply a lack of skills, and while the strong vocational training base in Uganda is equipping many young potential entrepreneurs with skills for self-employment, this is not enough, on its own, to ensure positive outcomes,” the report states. “Addressing the multiple constraints to employment, including access to finance, guidance and mentorship, linkages with employers, and business skills, amongst others, will help a greater number of youth to utilize their skills in productive employment.”

“Problem or Promise: Harnessing Youth Potential in Uganda” offers case studies of young Ugandans whose hard work, supported by peer networks, microfinance and training, has translated into success. “Now is the time for greater focus on and more comprehensive programs for youth development so that these aspirations can be turned into realities, assisting a much greater number of youth to become productive, happy and healthy citizens of Uganda.”

The report is available online at http://www.brac.net/content/uganda-youth-watch.

BRAC is a development success story, spreading solutions born in Bangladesh to 10 other countries around the world. From humble beginnings in Bangladesh, it is now the largest development organization in the world. Organizing the poor using communities’ own human and material resources, it catalyzes lasting change, creating an ecosystem in which the poor have the chance to seize control of their own lives. It does this with a holistic development approach geared toward inclusion, using tools such as microfinance, education, healthcare, legal services, community empowerment and more.

BRAC’s work now touches the lives of an estimated 126 million people, with staff and BRAC-trained entrepreneurs numbering in the hundreds of thousands. BRAC is a global movement bringing change to 11 countries in Asia, Africa and the Caribbean.

BRAC USA is an independent, affiliated 501(c)3 organization based in New York.

For more information on BRAC, go to http://www.brac.net.

ABOUT THE MASTERCARD FOUNDATION

The MasterCard Foundation is an independent, global organization based in Toronto, Canada, with more than $6 billion in assets. Through collaboration with partner organizations in 49 countries, mostly in Africa, it is creating opportunities for all people to learn and prosper. The Foundation's programs advance microfinance as well as youth education. Established in 2006 through the generosity of MasterCard Worldwide when it became a public company, the Foundation is separate and independent from the company. Its policies, operations, and funding decisions are determined by its own Foundation Board of Directors and President and CEO. For more information on the Foundation, please visit http://www.mastercardfdn.org.