Get Ready to Jump Around this St Patrick’s Day!

The Grafton Street Buskers are back for St Patricks Day with a fantastic new version of the House of Pain classic Jump Around. 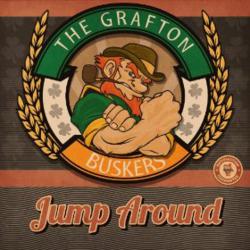 St Patricks is a celebration of culture around the world that allows everyone to sample the range of Irish experiences.

Following on from the highly acclaimed album ‘Irish Stout’ the ‘Jump Around’ single captures one of the bands favourite tracks to play live. The Graftons take on House of Pain’s party anthem and fuse it with traditional Celtic instrumentation and high energy pirate pop to drive audiences wild.

Band harpist and producer Aine O’Neill said “House of Pain said so much about the American Irish story in the nineties we wanted to add a more Celtic spin and make sure we kept having a party while we did it!”

The Jump Around cover is complemented by the B side, Fields of Athenry, a poignant ballad with a stirring chorus sung by Irish sports supporters around the world.

Aine O’Neill added “St Patricks is a celebration of culture around the world that allows everyone to sample the range of Irish experiences – and we’ve tried to get the two extremes of this experience on this single”.

The Grafton Street Buskers are a collective of talented young musicians united by their love of traditional Irish folk music. Their first album, released for St Patrick’s Day (17 March 2012), stands out from the crowd thanks to their distinctive modern updates of classics set alongside cover versions of contemporary tracks that raise the roof at their live performances.

Jump Around by the Grafton Street Buskers is available now on Amazon MP3.