Young Guns Produce, Inc., one of the largest suppliers of fresh and frozen Hatch green chile is buying new equipment to increase production for 2013. 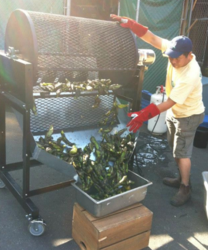 and with this new equipment we’ll be able to make even more Hatch green chile available to stores, restaurants and consumers

According to Franzoy there are few large scale green chile producers that actually fire-roast their product.

“Many either steam their green chile or bake it, which are both cheaper methods of production. The problem for the consumer is that these methods really take away from the flavor of the chile.”

The new roasting equipment is being joined by new production equipment used to fill each bag with product.

This equipment promises to make their production faster and more accurate. In addition it will facilitate traceability by printing lot numbers directly on bags of their product.

“Every day we’re looking at better ways to get our products to the consumer. We’ve recently begun selling our frozen Hatch green chile online, and with this new equipment we’ll be able to make even more Hatch green chile available to stores, restaurants and consumers than ever before.”