In A Free Society, Anyone Can Be A Victim Of Planned Murder 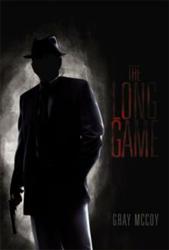 Your family’s past always finds a way back into your life whether you want it to or not.

Your family’s past always finds a way back into your life whether you want it to or not.

In his new murder mystery novel The Long Game, author Gray McCoy tells the story of how fictional character Nick Drexler, an honest businessman with a family of notorious criminals, uncovers his family’s dark secrets.

After serving two years on death row for a murder he did not commit, Nick Drexler begins a search outside prison walls after an appellate court threw out his conviction to find who was behind the murder and its framing.

Along the way, he discovers a conspiracy bigger than he had anticipated, learns many disturbing facts about his family’s past and finds romance where he least expected it.

With the use of decent but flawed characters, The Love Game unfolds as entertaining but well-developed escapist fare emphasizing love, evil and justice.

About the author
Gray McCoy graduated from Georgia State University with a Master of Business Administration. He spent his career working in various private and government sectors, most positions involving advanced technical writing. An avid reader, McCoy has had a lifetime interest in murder mysteries, both real and fictional.