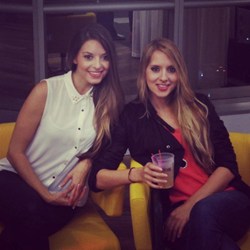 We built our agency on devotion. Our team is dedicated to the craft and put everything we have into each project. The chemistry we have during the creative process is pure magic.

The American Advertising Federation of Ft. Lauderdale gathers annually to celebrate the industry's most creative works at the ADDY awards. Each year the AAF receives over 50,000 local submissions making it the largest competition of its kind. This years event was held at Cinema Paradiso in Ft Lauderdale. Crea7ive Interactive Advertising added three more ADDY's to their fast-growing trophy case.

In 2012, Crea7ive Interactive Advertising racked up six ADDY awards bringing their grand total to nine. Their list of accomplishments continues to pile up due to the hard work and dedication of their leaders, Pia and Paula Celestino. Pia Celestino serves as Art Director at Crea7ive Interactive Advertising. Her passion for providing clients with the best web design is a direct cause of this agency's early success. Paula Celestino, Director of Social Media, develops innovative strategies and campaigns catered to achieve each clients' goals. Together, the Celestino sisters form a dynamic duo that has taken Miami web design and the advertising world by storm.

When asked about the recognition from the AAF, Pia states: “It's not just about being the best web design agency, it's about carrying out a vision and creating work that will last a lifetime. Picking up ADDY awards during the process makes it even more gratifying.” Their hard work hasn't gone unnoticed, Crea7ive Interactive Advertising was selected as one of the Best Branding Companies in the U.S. in 2012.

Their plans for following up such a monumental year revolve around growth. The company has more than doubled in size in the past year and they don't plan on stopping any time soon.

Crea7ive Interactive Advertising is building a team of young, artistic, and inspired graphic designers and PR specialists. “We built our agency on devotion. Our team is dedicated to the craft and put everything we have into each project. The chemistry we have during the creative process is pure magic,” says Paula Celestino.