Evolving changes in oil and gas production practices in the Marcellus Field have led to the increased use of fixed LEL monitors for the detection of methane and other gases in field production operations. 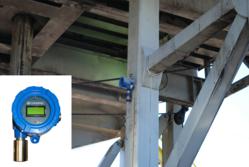 While the practice of using single gas separator and production units to serve multiple well heads is common in southern fields, climate factors in the north necessitate the installation of GPUs dedicated to single well heads for optimal gas production.

As a result of this shift, the number of GPU enclosures in the northern fields is several times greater than in the south. Although GPU process equipment and safety instrumentation have low rates of failure, the possible accumulation of methane gas within an increasingly large number of enclosed GPU structures, multiplies the small chance of a hazardous condition or accident occurring due to the concentration of gas enabled by the enclosures.

In the interests of worker safety, as well as for equipment monitoring, several shale gas production companies are making conscious decisions toward the installation of methane detecting LEL monitors inside new and existing shale gas field separation and production units. The CX Series is a simple and “smart” gas detector designed for use in hazardous or classified locations. An industry standard 4-20mA Analog output signal can be connected to any existing PLC, DCS, or EMS system. A simplified calibration procedure allows for a quick, non-intrusive, adjustment-free calibration.

CONSPEC Controls gas detectors and monitors can be deployed either as a stand-alone system, programmed to generate a local alarm when minimum gas parameters are exceeded, or seamlessly integrated with an existing control or alarm system. CONSPEC Gas Detectors and monitors employ a CONSPEC PLC which can be programmed to detect methane (CH4) and hydrogen sulfide (H2S), as well as more than 70 other combustible and toxic gases. Self-contained, solar-powered field models are also available. CONSPEC Controls offers a complete line of Gas Detectors and Monitors for the power generation, mining, oil and gas, chemical, and HVAC/COVC industries.

CONSPEC Controls is internationally recognized as a leader in the design, development and manufacture of gas detection instruments, monitoring and control systems. The company offers a wide array of products, ranging from fully integrated installations to stand-alone, independent devices. CONSPEC’s user-friendly devices are engineered to interface with both new and existing control equipment. Due to its long history in the mining industry, CONSPEC equipment is “coal grade,” that is, designed to work in the harshest environments. Combining state-of-the-art manufacturing and research, CONSPEC creates specialized instrumentation and equipment that meets individual customer applications and requirements.