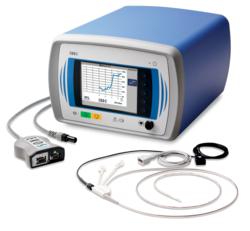 ULTIMA trial is the world’s first randomized controlled trial comparing the use of an endovascular approach along with anticoagulation to treat submassive pulmonary embolism vs anticoagulation therapy alone, the current standard of care.

ULTIMA is the world’s first randomized controlled trial comparing the use of an endovascular approach along with anticoagulation to treat submassive pulmonary embolism (PE) vs anticoagulation therapy alone, the current standard of care.

Dr. Nils Kucher, principal investigator, reported on the 59-patient study conducted at 8 European centers. Of the 59 patients, 30 were randomly selected and treated with EKOS catheters, a unique device that generates ultrasound energy while simultaneously delivering a clot-dissolving drug. The advantage of this combination is that the ultrasound conditions the clot resulting in more effective drug delivery; thus ensuring faster and more complete clot dissolution. All 59-patients’ heart function were measured pre and 24 hours post therapy. Patients in the EKOS group demonstrated statistically significant reduction in right heart enlargement with no adverse effects from the catheterization. There were no serious bleeding events in either group. There was one death in the non-EKOS group for reasons other than PE.

Patients with submassive PE typically have a major clot in one or both pulmonary arteries that interferes with the heart’s ability to pump blood into the lungs for oxygenation, causing enlargement of the right side of the heart. Not removing the clot burden may quickly result in right heart failure and death, or permanent pulmonary hypertension. Anticoagulation therapy does little to dissolve clots, but rather helps prevent further clots from forming.

Dr. Kucher commented, “ULTIMA is a pivotal study showing efficacy and safety of treating intermediate risk PE with a standardized interventional approach”. The average 24 hour improvement in right heart dysfunction among the EKOS treated patients, as measured using a heart parameter called RV/LV ratio, was 23%, compared to anticoagulation treated patients whose average improvement was only 3%. This difference is both clinically and statistically significant (p<0.0001). While patients treated with anticoagulation alone will generally improve over time, the EKOS-treated patients continued to show a statistically significant (p<0.0001) greater reduction in right heart dysfunction at 90 days than patients treated with just anticoagulation.

Kucher added, “It is not unlikely that the ULTIMA study may be the beginning of a treatment paradigm shift for PE similar to what was seen two decades ago for acute coronary syndrome. We used to treat acute myocardial infarction with intravenous clot dissolving drugs; yet, today this drug therapy has almost exclusively been replaced by endovascular treatment with balloons and stents.” Kucher continued that “ULTIMA promises to start a similar revolution for the treatment of PE patients at increased risk of death, changing management from IV drug therapy to an endovascular approach which may be safer.”

President and CEO of EKOS Corporation, Robert W. Hubert concluded, “A clinical study such as this one can give hope to thousands of patients who may otherwise face a lifelong challenge of chronic pulmonary hypertension or even death.

About EKOS Corporation: EKOS Corporation pioneered the development and clinical application of ultrasound infusion technologies in medicine, introducing its first system for the treatment of vascular thrombosis in 2005. Today, interventional radiologists, cardiologists, cardiothoracic and vascular surgeons at leading institutions around the world use the EKOS EkoSonic® Endovascular System to provide faster, safer and more complete dissolution of thrombus.

Pulmonary embolism occurs in more than 1 million patients in Europe and over 600,000 cases of PE each year in the U.S. alone of which upwards of 40% are classified as submassive. Patients with submassive PE have a major clot in one or both pulmonary arteries, which interferes with the heart’s ability to pump blood into the lungs for oxygenation, causing enlargement of the right side of the heart. Not removing the clot burden quickly may result in permanent pulmonary hypertension or even death. Anticoagulation therapy alone does nothing to dissolve clots, but rather helps prevent further clots from forming.