Bonita Platinum will be available at ShopMerwins.com to ship nationwide, with pre-sales beginning March 13th 2013. 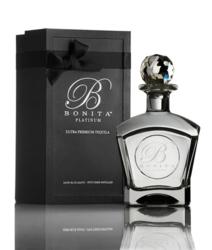 Xzibit will be personally autographing the first 100 bottles shipped from ShopMerwins.com, and we believe they will sell very quickly.

Tequila connoisseurs from across the US will rejoice this Wednesday, when the popular Bonita Platinum Tequila will become available nationwide.

The Bonita Spirits Company has teamed up with Merwin Liquors, owner of ShopMerwins.com, in an exclusive deal to see the ultra-premium tequila distributed nationally through the ecommerce platform.

“We receive constant requests for the product from all over the country,” said Cheryl Woodhouse, Marketing Director at Bonita. “Merwin Liquors is an institution in Minneapolis and the surrounding areas. We chose to partner with them to bring our product to the masses because we believe in blending tradition and modern technology in our distribution, just as we do with our product.”

The pre-sale orders will begin shipping on March 21st, but fans of Bonita Platinum are encouraged to take advantage of the pre-sales opportunity. “Xzibit will be personally autographing the first 100 bottles shipped from ShopMerwins.com, and we believe they will sell very quickly,” said Chris Brown, CEO and Founder of The Bonita Spirits Company.

For more information, or to pre-order a bottle of Bonita Platinum Tequila, you can visit ShopMerwins.com/Bonita.html

"We are excited to be part of the launch for this innovative new product." said Louis Dachis, proprietor of Merwin Liquors, "Bonita Tequila compliments our extensive ultra-premium tequila offering nicely and provides our image conscious customers with an excellent sipping tequila."

The Bonita Spirits Company is one of a select group of celebrity owned spirits in the world. The company was founded in 2010 by Chris Brown, former commercial pilot and accomplished entrepreneur. Bonita Platinum is an award-winning, ultra-premium luxury brand; the world’s only five-times distilled tequila. They have been featured on Good Morning America, The More Show, and The Morning Blend, as well as being featured in Star Magazine, UPTOWN Magazine, Haute Living, and more. For more information on the Bonita Spirits Company, please visit http://www.bonitaspirits.com

Merwin Liquors is a locally owned, privately held company that operates three retail beer, wine and spirits stores in Minnesota. The company offers the widest selection of spirits in the state at heavily discounted prices through their website http://www.shopmerwins.com