Businesses Expect the NZD to Ease over the Coming Year 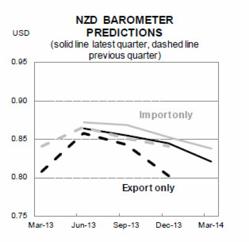 A high NZD tends to be beneficial to importers, given it reduces their costs in NZD terms and hence allows them to be more competitive on the NZ market.

The ASB Institutional Kiwi Dollar Barometer indicates businesses expect the NZD/USD to peak in June this year. While importers continue to have higher expectations for the NZD, relative to exporters, the divergence in expectations between importers and exporters has reduced since the previous quarter. This is illustrated on the first chart on the right, where the solid lines show the responses at the latest survey, while the dashed lines show the responses at the survey taken in the previous quarter.

This survey was taken between the 1st and 8th February, when the NZD/USD appreciated to almost 0.85. There was a sharp depreciation in the currency over late February and the survey results, particularly in regards to near-term expectations of the NZD, may have been very different had the survey been taken over that latter period.

In this Kiwi Dollar Barometer, we wanted to know if the high NZD/USD over the past quarter had any effect on business decisions in regards to pricing, hiring and investment. A high NZD tends to be beneficial to importers, given it reduces their costs in NZD terms and hence allows them to be more competitive on the NZ market. In contrast, a high NZD is detrimental to exporters, given it reduces their NZD returns and makes them less competitive in overseas markets.

while 29.9% of importers indicated they planned to increase
hiring in response to the high NZD.


decrease hiring, while 33.0% of exporters indicated no change to
hiring intentions in response to the high NZD.

Given a high NZD tends to benefit importers by making them more competitive in NZ markets, this encourages investment. Conversely, the high NZD is likely to impact negatively on the NZD returns of exporters, hence will tend to discourage investment.

investment in response to the high NZD, while 26.8% indicated
no change in investment intentions.


investment in response to the high NZD, while 33.0% indicated
no change in investment intentions.

Curiously, the majority of importers surveyed indicated they intended to increase prices in response to the high NZD. Strength in the currency tends to reduce the cost of imported goods, and recent inflation and retail trade data suggest the price of imported household items have fallen in the face of the appreciating NZD over the past year.

However, East & Partners notes these findings are in line with that of its Australian survey, and suggest this may be due to the fact some businesses increase prices simply because they have pricing power in the market and are hence able to put price increases through. Indeed, the majority (82.3%) of all businesses with annual turnover of over $150 million indicate they intend to increase prices in response to the high NZD. Hence, the result may merely reflect the dominance the importers surveyed have in their markets.

Interest in hedging continues to increase

The Kiwi Dollar Barometer finds businesses generally expect the NZD/USD to peak in June this year at around 0.87, before easing to around 0.83 by March 2014. This is in contrast to the ASB Economics forecast of a steady appreciation in the NZD/USD over the coming year to a slightly lower peak of 0.86 in March 2014.

The proportion of businesses intending to hedge their foreign exchange exposure continues to increase. The Barometer also finds the larger the business, the more likely it is to hedge, and the larger the business the greater the proportion of FX exposure hedged. There appears scope for small and medium-sized businesses to benefit from increasing their hedging capabilities in order to better manage their foreign exchange exposure.