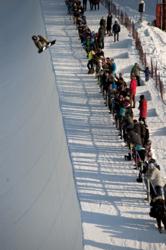 “It feels amazing to come back here and to be able to win again,” said I-Pod.

It was a hard fought battle, but I-Pod’s final in the high-pressure 10-man main event was the one that sealed the deal. He lit up the nearly 500-foot long Superpipe with a frontside 900 tail grab followed by a backside 900 mute to a frontside 1080 Tail Grab followed up with a Cab 1080 double cork mute. The exclamation point on the run was a super-stylish frontside 1080 double cork Truckdriver. His combination of amplitude, raw style, and technical firepower proved unbeatable.

“It feels amazing to come back here and to be able to win again,” said I-Pod. The Arctic Challenge is the season-ender event of the World Snowboard Tour, a contest he says, “has always been on a high level of technical difficulty and style.” Yet despite a hard-riding roster of the world’s most progressive Superpipe competitors, I-Pod was not forced to unleash his new secret weapon, his signature frontside double cork 1440, a trick he calls the “YOLO Flip.” Adding this Arctic Challenge victory to his season’s accomplishments puts I-Pod in a strategic position in the run up to next year’s Winter Olympic games.

I-Pod was not the only Monster rider on the Arctic Challenge podium this weekend. 14-year old Japanese pipe prodigy and 2013 World Snowboard Tour Halfpipe Champion Ayumu Hirano pulled a respectable third place at the event furthering his meteoric rise to snowboard Superpipe stardom. Following up his second place showing against Shaun White at last week’s US Open Snowboarding Championships, a win at the Burton European in February, and Silver at Winter X Games, Hirano also totals out his season as a certified threat to the Shaun White dynasty and the race for medals at the Olympic Games in Sochi 2014.

For more on I-Pod and Hirano, check out http://www.monsterenergy.com and http://www.facebook.com/monsterenergy. The site is dialed with exclusive photos, videos, and behind-the-scenes updates featuring Monster Energy athletes.