Was the Fairy Tale of Peter Pan and Wendy Based on an Earlier Legend? New Book Introduces Historical Wild Boy whose Adventures May Have Inspired James Barrie's Classic

Peter: The Untold True Story, a new historical novel by Christopher Mechling, explores the remarkable life of a boy named Peter who became a legend in 18th century England, over 100 years before James Barrie penned the tale of Peter Pan. 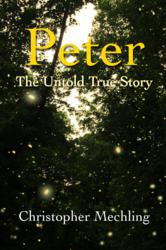 He was a boy of few words, but his character captivated the imaginations of many of England's best contemporary writers and thinkers, including Daniel Defoe and Jonathan Swift. In the Age of Enlightenment, the feral child known as Peter the Wild Boy was a charming curiosity beloved by those who met him, including King George I of England and other members of the Royal Family. Peter: The Untold True Story, by Christopher Mechling, tells the epic adventures of the real boy whose life is mirrored in the fairy tale of Peter Pan.

So popular was Peter when he was first introduced to English society in the spring of 1726 that Jonathan Swift remarked, "...there is scarcely talk of anything else." Having been discovered living alone in the forest of Hamelin, Germany, Peter was estimated to be eleven or twelve years old. It seems he left his parents when he was very young and learned to survive on his own, perhaps with the help of some forest animals.

Caroline of Ansbach, wife of George II and future Queen of England, was touched by Peter's innocence, and took the boy into her care. It was the hope of the Royal Family, not only to provide for Peter's future, but to help him grow up to be an ideal English gentleman. For several years, Peter lived in the royal residences, and was the talk of London. Even after he retired to a comfortable life in the country, Peter the Wild Boy remained a legendary figure in England, and attracted visitors to his home for decades.

Throughout his life, even into his seventies, Peter maintained a youthful appearance and energy. Evolutionary theorist Lord Monboddo, who visited Peter in 1782, said of the Wild Boy, "Though he must be now about 70 years of age, [he] has a fresh, healthy look. His face is not at all ugly or disagreeable, and he has a look that may be called sensible and sagacious, for a savage. [He] had always that gentleness of nature, which I hold to be characteristical of our nature, at least until we become carnivorous, and then hunters or warriors. He is said to have sometimes run seventy or eighty miles a day. His strength always appeared to be so much superior that the strongest young men were afraid to contend with him, and this strength continued almost unimpaired till about a year and a half ago."

Christopher Mechling's imaginative dramatization captures the poignant experiences of Peter and the people who interacted with him. The epic story of the Wild Boy's life, spanning more than seventy years, navigates a tumultuous and thoughtful period in English history, rich with characters.