In the heat of debates about the Affordable Care Act, the people who stand to be most affected are often overlooked in favor of discussions about lower costs, higher taxes, and more income for health care providers. An infographic by FinancesOnline.com tries to answer the question 'what is the place of African Americans in the big picture?' 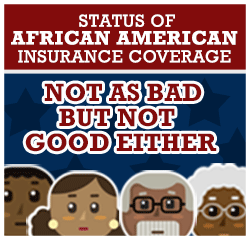 Although the current health insurance status of African Americans is not the worst countrywide, it’s not the best either.

From statistics provided by the National Health Interview Survey and the US Census Bureau, FinanceOnline.com journalists created an alarming Uninsured and Unhealthy: The Health Insurance Woes of African Americans infographic in which they conclude that, although the current health insurance status of African Americans is not the worst countrywide, it’s not the best either.

In his 2013 state-of-the-union address delivered on February 12, President Obama issued strong statements on the issue. “Yes, the biggest driver of our long-term debt is the rising cost of health care for an aging population… We won’t grow the middle class simply by shifting the cost of health care or college onto families that are already struggling, or by forcing communities to lay off more teachers, cops, and firefighters.”

On the surface, everything looks on the up-and-up for ethnic minorities when the Affordable Care Act’s policies come into full effect. There will be lower costs and greater choices for quality health care to control chronic diseases, avail of preventive health care, have access to primary care, and bridge the health disparities plaguing African Americans.

For now, however, things are as the Uninsured and Unhealthy: The Health Insurance Woes of African Americans infographic from FinancesOnline.com shows. Not bad, but not good either.