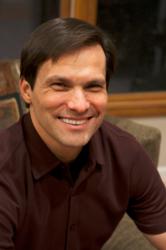 I’m certain that Jim will both wisely steward the ministry of Compassion and boldly lead us into new areas of kingdom impact.

Compassion International’s Global Board of Directors announced today the appointment of Santiago (Jim) Mellado as the ministry’s new president and CEO. Board members made the unanimous decision after a global search that began late last year. Since 1993, Mellado has served as president of the Willow Creek Association, a not-for-profit ministry dedicated to helping local churches thrive. Mellado will formally take his new position in September.

“My heart is full these days as I anticipate joining Compassion’s team and giving myself fully to the cause of releasing children from poverty in Jesus’ name,” Mellado said, “As I look back on my life experiences, I can see how God has been leading, stirring and preparing me for this role.”

During Mellado’s tenure leading the WCA, worldwide ministry income grew from $2 million to more than $20 million, membership grew from 860 churches to over 7,000 and annual conference attendance jumped from approximately 10,000 to more than 180,000.

“Jim Mellado is the right person to lead this organization into the future,” says Board Chair Karen Wesolowski. “His leadership at the Willow Creek Association coupled with his heart for the Church and children in poverty make him the ideal choice for this critical role.”

“I’ve known this remarkable man for 20 years,” says Dr. Wess Stafford, who has been with Compassion for 35 years, serving the last 20 as president and CEO. “I’m certain that Jim will both wisely steward the ministry of Compassion and boldly lead us into new areas of kingdom impact.”

Jim Mellado becomes only the fifth president in Compassion’s 61-year history. He inherits a robust ministry that has seen tremendous growth over the past six decades.

Under Stafford’s leadership, the ministry has grown from just over 180,000 children in 22 countries in 1993, to now over 1.4 million children in 26 countries. Annual revenue for the organization has grown from over $55 million when Stafford took office in 1993 to now over $600 million. Stafford is an internationally recognized child advocate and author of two books on child advocacy, promoting his message of God’s heart for children around the world. He will have a continuing advocacy role with Compassion’s ministry following his retirement from the presidency in September.

ABOUT COMPASSION INTERNATIONAL:
Compassion International is the world’s leading authority in child sponsorship. Compassion revolutionized the fight against global poverty by equipping the Church to develop children out of poverty to become responsible and fulfilled Christian adults. It is the only child sponsorship program to be validated through independent, empirical research. Today, Compassion partners with more than 6,000 Christian churches in 26 countries to release more than 1.4 million babies, children and students from poverty in Jesus’ name. Compassion has been awarded the highest rating for financial stewardship and transparency for 12 consecutive years by Charity Navigator, America’s largest charity evaluator. For more information on the ministry, visit compassion.com or follow on Twitter at @compassion.