Vietnam War veteran Ray Gleason persevered through a difficult homecoming and now experiences success as an author detailing the Vietnam War—beyond the hordes of novels detailing the travails, Gleason writes a tribute to the men he served with, featuring their human triumphs over impossible odds. 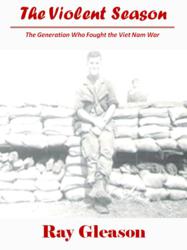 The fiftieth anniversary of the infamous “Gulf of Tonkin Incident,” which propelled the United States into the Vietnam War, a conflict which continues to haunt us today, is quickly approaching. Following the war, the U.S. suffered social turmoil, a weakened faith in the government, resentment towards the military and the shunning of veterans.

In his new novel, The Violent Season, Vietnam veteran and author Ray Gleason transcends the censure and despair surrounding that war and tells the story Gleason believes his fellow soldiers would have wanted him to tell and his fellow citizens need to hear. With his second novel, set to be released in March, 2013 on Amazon.com, Gleason says that his experiences in Vietnam have allowed him to produce not a war story, but rather a story about the human spirit attempting to create good even when confronted with impossible odds.

Jimmy tried to calm himself by walking around the perimeter. But, the darkness seemed to close in on him; it seemed to press the very breath from his body. Everywhere he went, he ran into little clusters of guys talking, whispering in the dark, talking about anything not to have to think about what might happen to them tomorrow. They didn’t want to think about who was waiting out there in the dark, out beyond the wire, out in those dark hills […] Some guys just sat by themselves, their very silence a scream in the darkness. Jimmy felt a need to join them, talk about anything to get his mind off what they had to do the next day. He didn’t know how. So, he answered some greetings he got as he passed by and then returned to his private darkness. (from The Violent Season)

Gleason is one of the few who served in that war and who dares to tell the truth about it. He feels obligated to share his experiences and, instead of telling an adventure story of war, an allegory of good versus evil, he made his Vietnam novel a tribute to the men and women, Americans and Vietnamese, who experienced it.

Although after the war, numerous veterans suffered psychological scars often associated with such a traumatic event, unable to escape and the despair of Vietnam, Gleason managed to overcome the odds to become a scholar, teacher, writer and father.

Gleason is a lecturer at Northwestern University’s School of Continuing Studies, teaching both undergraduate and graduate courses in medieval literature. He received a Ph.D. (1997) in Medieval Literature and an MA (1989) in English Literature from Northwestern University, as well as a BA (1974) in English Literature and European History from Hunter College in New York. While Gleason’s academic résumé is stellar, his military record is equally impressive. As a retired infantry major in the United States Army, Gleason understands what military personnel go through first-hand, and was able to express this in his writing. During the Vietnam War, Gleason served as a rifleman and squad leader in Alpha Company, 2nd Battalion, 35th Infantry. He then served as a long-range reconnaissance patrol (LRRP) and Hawkeye team leader with K Company, 75th Infantry (Ranger).

“The people I served with in war went there as well-meaning human beings who wanted to defend their country and just do the right thing,” Gleason commented. “Their story deserves to be told.”

For more information on Ray Gleason, and to pre-order a copy of The Violent Season, visit http://www.raygleason.com.

Ray Gleason is a retired infantry major of the United States Army. He has been awarded several commendations and decorations, including the Combat Infantry Badge (CIB), Bronze Star with V (Valor), and the State of New York Humanitarian Service Medal. Gleason was also granted the State of Ohio Commendation Medal and Vietnam Cross of Gallantry with Gold Palm. He is currently a lecturer at Northwestern University’s School of Continuing Studies in Chicago. Gleason received a Ph.D. (1997) in Medieval Literature and an MA (1989) in English Literature from Northwestern University. He also received a BA (1974), Summa Cum Laude, Phi Beta Kappa, in English Literature and European History from Hunter College in New York. He has taught literature and writing at Mundelein College, Lewis University and William Rainy Harper College. Gleason is on the Leadership and English faculties of the Culver Academies in Culver, Indiana.

Gleason is the author of A Grunt Speaks and The Violent Season. For more information on this war author, visit http://www.raygleason.com.