"The Scott and Ryan Story" is a dramatic, heart-warming family-friendly movie about two young men who learned early on that you’re never too young to start making choices that can result in life-long wonderful rewards or devastating regrets. http://www.gofundme.com/The-Scott-and-Ryan-Story 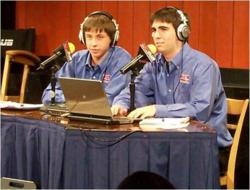 “In an era where the negative influence television, movies and video games has on today’s youth is highly debated, “The Scott and Ryan Story" is a wholesome, peer-to-peer message that will indeed inspire the entire family”. Jaime M. Rivera, Movie Creator

Both just 15 years old, Scott and Ryan accomplished an amazing feat by co-hosting a prime-time weekly sports radio talk show before a studio audience hosting sports celebrities. The show aired live throughout the U.S. and Canada from the ESPN Club at Walt Disney World/Orlando.

A project of the YSN Sports Broadcasting Academy, “The Scott and Ryan Story" is about choices and regrets made during the formative teen-age years. It's also about second chances.

Through the Kickstarter fund-raising platform, the YSN Sports Broadcasting Academy is seeking to partner with three corporate sponsors who target the teenage demographic. Upon completion of the project, a free DVD copy of the movie, along with a lesson plan will be sent to the over 37,000 public and private high school in the U.S.

ABOUT US: The YSN Sports Broadcasting Academy is a prestigious, 13-week national training program for high school students and recent high school graduates. Classes are taught in a live and interactive web-based teaching platform.