The Claremont Colleges Library is the preeminent academic resource for the seven colleges that comprise the Claremont Colleges Consortium - Claremont McKenna, Harvey Mudd, Pitzer, Pomona, and Scripps; and two graduate institutions, Claremont Graduate University and the Keck Graduate Institute of Applied Life Sciences. The library has a general collection of approximately 2 million volumes, ranking third in the state of California among private institutions 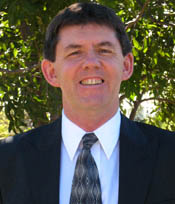 The Claremont Colleges are an academic powerhouse. I was so impressed by the faculty, librarians, staff, and students I met.

Mulroy comes to the Claremont Colleges from the University of California, Los Angeles (UCLA), where he has served since 2008 as the associate university librarian for academic services.

He has more than 25 years of library experience and is a proven leader in all facets of library management, including public services, collection management, budgeting, personnel, fundraising, and technological innovation.

“Kevin is a perfect fit for the Claremont Colleges,” said Deborah A. Freund, president of Claremont Graduate University and head of the Joint Governance Committee of the Claremont Colleges. “He has nurtured and led some of the most esteemed research collections in the country. He’s an academic and an author, and he’s going to get along well with the faculty, staff, and students. We are delighted to welcome him.”

Mulroy will lead a library unlike any other in the country.

Located at the heart of the seven campuses, the library has a general collection of approximately 2 million volumes, ranking third in the state of California among private institutions.

It also has extensive holdings of journals, multimedia materials, magazines, and newspapers, providing access to articles in over 70,000 periodicals, most available electronically. It is a depository for publications issued by the United States government, and has holdings from the state of California, Great Britain, the United Nations, and other international agencies. The library also holds large special collections including archives, artifacts, hymnbooks, manuscripts, music scores, and scrapbooks.

As dean, Mulroy will ensure the library’s continued integration into the fabric of each of the seven colleges.

"I'm thrilled to be appointed the A.J. McFadden Dean of the Claremont Colleges Library and I look forward to leading the library team in serving the information needs of these seven great institutions of higher education,” Mulroy said. “The Claremont Colleges are an academic powerhouse. I was so impressed by the faculty, librarians, staff, and students I met during the search process. The quality and ambition of the colleges is plain to see. It will be an honor and a privilege to join such a great institution."

During his service at UCLA, Mulroy guided about one third of the university’s vast, nationally ranked library operations. He managed a budget of more than $10 million and held oversight of more than $5 million in acquisitions funds. His portfolio included responsibility for the operations of the Charles E. Young Research Library’s Collections, Research and Instructional Services; Library Special Collections; enterprise-wide Teaching and Learning and Access Services; the Powell (College) Library; the East Asian Library; the Arts Library; and the Music Library.

From 2001-08, he served at the University of Southern California (USC) as associate executive director for research collections and services and as assistant dean for contracts and grants.

Before that, Mulroy worked for eight years as director of research at the Autry National Center. He also held earlier positions at the Getty Research Institute and the UCLA Library.

Mulroy’s areas of subject expertise include US ethnic history and American studies. He has written two books on relations between African-Americans and American Indians: The Seminole Freedmen: a History and the award-winning Freedom on the Border: the Seminole Maroons in Florida, the Indian Territory, Coahuila and Texas. Mulroy co-edited Seeking El Dorado: African Americans in California. And he edited a book based on an exhibition he curated at the Autry on international responses to the Western entitled Western Amerykański: Polish Poster Art and the Western.

Mulroy has presented and published widely on various aspects of US ethnic history, popular culture, and academic librarianship. He has also curated a number of exhibitions and organized public programs and events.

He received an MA in US history and politics and a PhD in American studies from the University of Keele (England) and an MLS from Rutgers University.

Mulroy will report to the lead institution of the Joint Governance Committee of the Claremont Colleges, which is composed of the presidents and chief academic officers of the seven colleges.