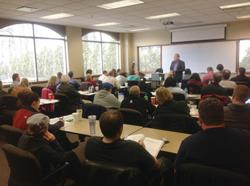 The increasing number of real estate pre-licensing-registration numbers and state test takers is an indicator of substantial recovery, market resilience, consumer confidence and growth across the housing market.

Hondros College announced today its 2013 spring real estate industry forecast. Based on trends from the Hondros College database of student statistics and the 2013 Ohio Association of Realtors® (OAR) Your Market At A Glance report, the spring forecast indicates continued recovery and growth in the Ohio housing market.

“Based on Q1 numbers and historical trending, our 2013 spring forecast predicts this spring will be a great time to sell homes, as the Ohio market rebounds and prices steadily improve,” said Stephanie Webb, Hondros College Director of Marketing.

According to the most recent OAR Your Market At A Glance report, Ohio home sales have been integrating in a positive direction for seven consecutive quarters. OAR cites local market improvement over the last three years, following the steady decline in home prices since 2005.

In 2012, a double-digit increase in sales activity met a 5.9-percent rebound in average home sales price, according to OAR. This bolstered confidence and strength in the market. The Your Market At A Glance report states the “housing marketplace is continuing to make headway… [with] an uptick in home-sales activity across the state in every quarter since the second quarter of 2010.”

About Hondros College
For more than 40 years, Westerville, Ohio-based Hondros College has been educating individuals who want to improve their lives by finding, entering and succeeding in a new career. Hondros College offers a variety of programs to prepare students for occupations that offer stability, flexibility, independence and financial reward. Hondros College’s six Ohio locations provide the highly-focused education needed to succeed in a broad range of careers in real estate, appraisal, home inspection, mortgage, insurance, title insurance, securities, personal training, tax preparation and the oil & gas industry. “Like” Hondros College on Facebook at http://www.facebook.com/hondroscollege and Twitter at http://www.twitter.com/hondros.