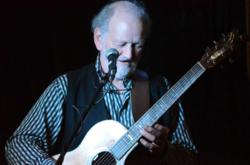 Valdy Playing at the Dominion Hotel in Minden, Ontario, Canada

What a blast to be able to see such an icon (Valdy) in a small intimate setting.

Small town venues for concerts with well-known Canadian artists are an emerging phenomenon that adds a different element to the experience for the concert goer. The Haliburton Highlands, Ontario, Canada is a prime example of what can be done to enrich the cultural environment of the community through music.

Audiences in the Haliburton Highlands are being exposed to new emerging acts like “The Once”, who just after being in the Highlands won “best Roots/Traditional recording of the year” at the East Coast Music Awards. Audiences are also exposed to well-established favourites such as Valdy who just played at the Dominion Hotel in Minden on Saturday night. Variety does not stop there. Promoters within the Highlands are also featuring classical and opera stars. There is something for every taste and often more than one event on the same night: all of which get sold out. This is a major accomplishment for a region that has a full-time population of about 15,000 people.

Do not despair that the aforementioned concerts were missed. There are still 2 opportunities during the 2012-2013 Haliburton County Folk Society concert series to experience the benefits of an intimate concert setting with well known Canadian musicians. Purchase tickets on MadeInHaliburton.ca.

May 24th at 7:30 Catherine MacLellan will be performing at the Minden United Church. Catherine is an award winning Canadian musician from Winnipeg, Manitoba. Exclaim! Magazine states that “(MacLellan) probes matters of the heart with a poetic scalpel, always avoiding self-pity. Her voice is similarly pure and honest, managing to simultaneously sound fragile yet strong.”

June 21st at 7:30 Derek McGrath will be performing at the Haliburton Highlands Museum. Derek is an award winning actor who has enjoyed a distinguished career in the theatre, on television and in the movies. He is also a great singer / songwriter who writes about every day characters in a poignant and interesting manner.

April 27 at 8:30 pm Lance Anderson will be performing at the Dominion Hotel. He is an Ottawa-born producer who is an active composer / arranger in film and TV. Although he is a classically trained musician he has played in the blues scene in the Toronto area for more than 20 years.

May 18 at 8:30 Harrison Kennedy will be performing at the Dominion Hotel. Harrison became a member of the group “Chairman of the Board” in 1968. He has appeared on the Johnny Carson Tonight Show, Soul Train, American Bandstand, and England’s “Top of the Pops”. He has also played with many of the all time greats such as B.B. King and Smokey Robinson.

June 22nd at 8:30 Fathead will be performing at the Dominion Hotel. With 2 Juno Awards along with numerous music industry trophies to their credit, FATHEAD has played the top blues rooms, concert halls and music festivals from coast to coast. Their music is steeped heavily in the blues, married with elements of rhythm and blues, funk and soul, and possesses a unique ensemble sound that is immediately recognizable as their own.

An additional event that is not part of the series is also being held at the Dominion Hotel on May 24th. The Dominion Hotel is delighted to announce a solo appearance of Morgan Davis on Friday, May 24th. Morgan is a big name in the blues scene. He has opened for Willie Dixon, John Lee Hooker, Albert King, John Hammond, Albert Collins and more. He backed Dr. John at one point and has shared the stage with Colin Linden who produced his second album. Morgan will present his solo show in the Dominion Hotel's casual and intimate venue.

The music in the Haliburton Highlands doesn’t stop there: The Folk Society also sponsors a Winter Folk Camp that uses well-known Canadian performers to provide workshops for people interested in enhancing their musical talents. This year’s faculty for the Winter Folk Camp was Eve Goldberg and the group “Betty and the Bobs”. This group consists of Susie Vinnick, Soozie Schlanger, Katherine Wheatley, David Woodhead, Wendell Ferguson, Rich Greenwood and David Matheson (replaced for camp by Tom Leighton). Watching the final camp show, where the participants show off the skills they have acquired, is an uplifting and emotional experience. It is absolutely amazing to see what can be accomplished in a few days with a group of virtual strangers. Mark the first weekend in March on the calendar and keep an eye on the webpage to see who the faculty will be for next year.

Added to this is the fact that the Haliburton Highlands is one stop on a Home Routes tour that also brings well-known Folk musicians to the area for in home concerts. The Folk Society acts as the host for the series but, the concerts occur in various homes throughout the Haliburton Highlands. This is a wonderful way to really get to know the musicians. There are two more concerts in this series for this year: March 15th and April 13th.

The Haliburton Highlands, Ontario, Canada is truly “A Natural Work of Art” with its lakes, streams, trees and rock faces but, it doesn’t stop there. This community is a community that embraces the arts as a major economic engine. It is a small, close knit community that has developed a rich cultural component that supports the interests of the artists and artisans who dwell here. The richness of the musical environment is only one example. Check out the artblog for a complete listing of the musical events for the next three months.