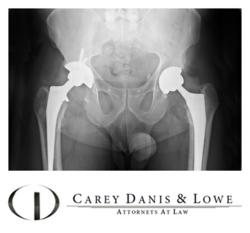 With defective medical device lawyers currently investigating DePuy ASR Hip Replacement system cases, Carey Danis & Lowe is optimistic about the future of DePuy ASR Hip lawsuits that go to trial. Kransky v. DePuy, a case being heard in a California Superior Court in Los Angeles, involved the plaintiff, Loren Kransky, and resulted in Kransky receiving a compensatory award of $8.3 million, according to a New York Times report on the DePuy trial.

Defective medical device lawyers at Carey Danis & Lowe are closely following the Chicago trial, known as Strum v. DePuy, 2011-L-9352, Circuit Court of Cook County. Carey Danis & Lowe will watch the case to see what evidence will be brought before the jury, and if this evidence persuades them that Johnson & Johnson and DePuy should be punished through payment of punitive damages for malicious and negligent business practices regarding the development and marketing of the DePuy ASR Hip. A Bloomberg article on Strum v. DePuy states that the trial began with opening statements on March 11, so there remains much more information to be brought forth before the jury.