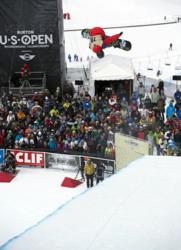 “It’s just so hard nowadays, because the riding level in both slope and pipe is getting higher and higher. It’s a lot of work, if you want to be good in both disciplines.”

Finnish contest killer Peetu Piiroinen was crowned the Overall Champion of the 2013 TTR World Snowboard Tour on Saturday. Having racked up the most combined tour points in Superpipe, Slopestyle, and Big Air events throughout the season, the versatile 25-year old Olympic Silver medalist and perennial points leader made this year’s WST overall title his fourth in just five years. Constantly battling the world’s best at venues all over the world, Piiroinen remains the only rider to have ever earned consecutive WST Overall titles, and for his continued contest consistency, he took home his fourth TTR trophy and another check for $50,000. From contest to contest throughout the season, Piiroinen battled last year’s Overall Champion Ståle Sandbech for top ranking on the tour and secured the points needed to win it at last week’s season-ender event, The Arctic Challenge.

“It feels so incredible of course that I was still able to win the Overall title after Sandbech got it last year,” said Peetu. “It’s just so hard nowadays, because the riding level in both slope and pipe is getting higher and higher. It’s a lot of work, if you want to be good in both disciplines.”

Very few riders have the skill and versatility to excel in more than one discipline; a feat that Piiroinen pulls off with ease. His history making four-peat on the WST puts the exclamation point on another solid season for the focused Finn. In February he laid claim to first place at the legendary Innsbruck Air & Style contest, snagged the Bronze in Slopestyle at Winter X Games, and pulled off six more top 10 finishes throughout the winter. With the score sheets officially closed on the 2013 season, Piiroinen’s continued dominance in all disciplines keeps him locked in pole position in the run up to the 2014 Winter Olympics in Sochi, Russia.

For more on Piiroinen, check out http://www.monsterenergy.com and http://www.facebook.com/monsterenergy. The site is dialed with exclusive photos, videos, and behind-the-scenes updates featuring Monster Energy athletes.