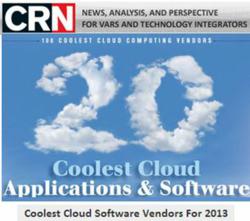 (Acumatica's) ability to offer ERP in a SaaS model or hosted on-premise, in a data center or in the cloud remains a winning formula.

Acumatica, a leading global provider of cloud Enterprise Resource Planning (ERP) and financial software, today announced it was named one of “The 20 Coolest Cloud Software Vendors″ for 2013 as part of the comprehensive list of the “100 Coolest Cloud Computing Vendors” by United Business Media’s tech site, CRN. This is the second year in a row Acumatica has made this list.

In the listing, CRN editors noted: “Cloud ERP software vendor Acumatica enjoyed solid growth throughout 2012, adding partners and expanding territories. Its ability to offer ERP in a SaaS model or hosted on-premise, in a data center or in the cloud remains a winning formula.”

“It’s an honor once again to be named one of CRN’s top 20 coolest cloud software vendors for 2013, among other market leaders such as Microsoft, Google, and SAP,” said Stijn Hendrikse, Chief Marketing Officer of Acumatica. “Being recognized as a leading cloud ERP provider – and being 100% committed to our global channel partner network – gives our SMB customers an adaptable solution and a clear competitive advantage,” he added.

The CRN list features cloud software vendors considered by CRN editors to be some of the coolest and most innovative in the channel and in the cloud market today. The list is compiled by a team of CRN editors and through solution provider nominations. View the slideshow of CRN’s Top 20 Coolest Cloud Software Vendors.

Founded in 2007, Acumatica is the fastest-growing provider of adaptable cloud ERP applications for small and midsized businesses (SMBs). Acumatica’s browser-based cloud ERP apps (financials, distribution, CRM, and project accounting suites) are optimized for ease of use, adaptability, speed, and security. Acumatica Studio, the technology development platform, gives ISVs and OEMs competitive advantage and fast time-to-market for developing and integrating cloud-based apps using industry standard tools. Unlike other SaaS ERP vendors, Acumatica is the only cloud ERP solution to offer businesses unparalleled adaptability, from choice of deployment, to device independence, to unlimited users, to licensing, integration, and customization options. Delivered through a global channel partner network of VARs, ISVs, and OEMs, Acumatica is available in the U.S., Canada, and Mexico, with global affiliates in Europe, South East Asia, and the Middle East. With U.S. headquarters in Kirkland, Washington, and software engineering based in Moscow, Russia, Acumatica has been named a Red Herring Top 100 Global Tech Company. Learn more by visiting the new http://www.acumatica.com.