Power Practical will be displaying the PowerPot at this year's International Sportsman's Expo in Salt Lake City, Utah. The innovative device is a cooking pot that generates enough power to charge smartphones and other electronics. 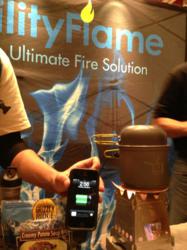 The PowerPot on display at Outdoor Retailer's 2013 Winter Market in Salt Lake City.

At Power Practical our goal is to design useful energy products for the consumer market but we also like raising awareness about alternative technologies and the potential that they have.

Patrons of this year's Salt Lake City ISE will be happy to see a familiar face. Power Practical attended the expo last year in one of its first public outings to debut the PowerPot. The product was met with a positive response and the company has decided to return.

Power Practical is a Utah-based company that designed the PowerPot in 2011. The PowerPot is a thermoelectric generator, meaning it converts heat into electricity. It accomplishes this with solid-state thermoelectric modules, which are built-in to the bottom of the pot. Since there are no moving parts, it is inherently robust and easy to use. Simply add water, put the PowerPot on a fire and it will generate electricity. Plug in the USB charging cable and charge a growing number of USB devices such as smartphones, headlamps, GPS units, mp3 players, cameras and so on.

After running some product tests at consumer expos last Spring, the PowerPot launched on Kickstarter and went on to move over 800 units in a 30-day campaign. Since then, the company has sold units online and moved into retail stores across the US. Power Practical's chief engineer Paul Slusser says the company hopes to educate people about thermoelectrics at the show, and about alternative energy in general: “At Power Practical our goal is to design useful energy products for the consumer market but we also like raising awareness about alternative technologies and the potential that they have.”

Look for the PowerPot at booth #1525 at the Southtowne Expo Center in Sandy, Utah. To learn more about the portable charger, visit the Frequently Asked Questions section on their website.