The fine-dining restaurant changes its hours in preparation for the Ivywild School. 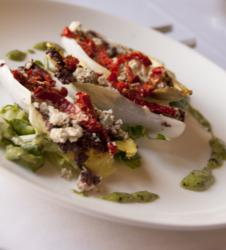 “We’re getting ready for a bigger and better fine dining selection at The Blue Star.

The Blue Star recently announced new hours of operation. Beginning April 1st, the restaurant will be open for dinner from 3pm to 10pm seven days a week. In addition, guests visiting The Blue Star will be introduced to its new seasonal menu tomorrow, which will include a vast selection of chef-driven dishes.

“We’re getting ready for a bigger and better fine dining selection at The Blue Star,” said Joseph Coleman, owner of The Blue Star Group. “This change is coming at a very exciting time for us, with the Ivywild School just around the corner.”

Joseph Coleman is also one of three local entrepreneurs spearheading the 2.5-acre project neighboring The Blue Star. In addition to Bristol Brewing Co. relocating its operations into the former elementary school, Coleman is scheduled to open three shops: The Old School Bakery, The Principal’s Office, and a charcuterie boutique. South Tejon Street is shaping up to be a destination; the fine-dining establishment is redirecting its focus on dinner and a new Happy Hour program in preparation for the Ivywild School.

The Ivywild School will open to the public in late April. For more information and/or to schedule an interview, contact Christina Brodsly at cbrodsly(at)gmail(dot)com or 832.671.5187 (cell).