FAC 51 The Hacienda’s first Manchester event of 2013 sees the club return to Sankeys this Easter with a selection of the club’s finest ever residents performing at Hacienda Good Friday 29th March in a night that mixes the music, atmosphere and the DJ’s that defined the original venue. 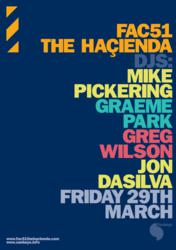 This time I'm hoping to get together with Mike to go through our vast collections and try and come up with some unexpected tunes, not just classics either. There’ll be some great music and hopefully a few surprises. And maybe a hug or two.

Together again, at the top of the bill, Graeme Park and Mike Pickering resume their legendary partnership and play together in Manchester for FAC51 for the first time in five years with the dynamic and hugely respected duo set to be playing both individual sets and then a very special and unique back to back session.

“When we DJ together, it just always feels totally natural and our personalities just fit. We shared an amazing life experience and time together at the Hac and I think it’s bonded us for life really. Its five years since we last played Manchester together so we’re both really excited and keyed up for it. Expect great music and a big night out.”

“When we used to play together every week there were tunes I didn't play because I knew Mike would and vice-versa. 21 years after our Friday Nude nights ended, that's still the case. The last time we played together we did more of a back-to-back set and we still had that second sense about what we were going to play.”

“This time I'm hoping to get together with Mike to go through our vast collections and try and come up with some unexpected tunes, not just classics either. There’ll be some great music and hopefully a few surprises. And maybe a hug or two.”

Joining Mike and Graeme, tastemaker DJ Greg Wilson also comes back to the Hac for a three hour set in Spektrum upstairs. Greg became a resident at The Haçienda in 1983, having previously cut his teeth at The Wigan Pier and shaped the musical policy of The Haç with his individualistic take on early US electro and disco, a style showcased in his acclaimed “Credit To The Edit” series of albums.

Rounding up the returning residents, Jon Dasilva also brings back his musical skills on Good Friday which have been well known to The Hac ever since Jon became a regular at the club with Hot in 1988. Jon’s musical tastes remain adventurous and he retains the anything goes spirit of Acid House, recently enjoying a huge international hit with “Love Somebody Else”, a reworking of his classic remix with Maceo Plex which has been nominated as The International Dance Music Awards “Best House Track” of 2012.

Finishing up the extensive bill, Manchester Underground’s Russ brings his boxes to Spektrum for a vinyl only set while Herbie Saccani, James Noon and friends take charge of Sankey’s bar.

One more surprise for Hacienda Good Friday sees a live performance by Davos, who shot to prominence with his YouTube Piano House clip in December which has received some 200,000 views. Davos merges classic piano breaks from anthemic tunes into his set from the likes of Rhythm Is Rhythm, Jinny, Soft House Company, Sterling Void and more, and he is increasingly in demand from the best festivals and clubs for his live set.

Black Grape’s Kermit will also be performing a PA at the Hacienda Good Friday Event. See the event on Facebook here...
https://www.facebook.com/events/444672055605369/