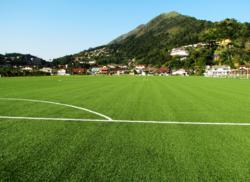 Act Global was selected because of their high-quality artificial turf and commitment to FIFA international performance standards.

With the recent installation of a FIFA Recommended Two Star synthetic turf pitch from Act Global, the Confederação Brasileira de Futebol (CBF) has one of the top playing surfaces in the world. The FIFA Two Star mark indicates a field which is assured to meet the highest international performance and quality standards for elite level football.

Bordered by lofty mountains, and situated at an elevation of 871 meters outside Rio de Janeiro, the site of the CBF Training Center is picturesque. The new synthetic turf pitch was installed as part of a FIFA Goal Project, which enables member associations to fulfill developments which advance football in their countries. Act Global was selected because of their high-quality artificial turf and commitment to FIFA international performance standards.

The original construction of the CBF Training Center was the first Goal Project implemented in Brazil, completed in 2005, to help elevate football education and training in this top football nation. The famous Brazilian national football team is the only national team to have played in every FIFA World Cup, and with five World Cup victories, they currently hold the title for most wins. In 2014, Brazil will also host the FIFA World Cup.

Over the last seven years, Act Global has been awarded a total of 15 FIFA Goal Projects in Africa, Asia and South America.