The restaurant in Jupiter, Fla., hung a 16-foot, world-record shark from its two-story ceiling. 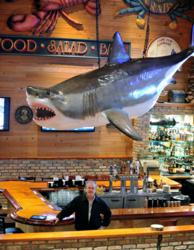 Shipwreck Bar & Grille re-opened four months ago after a solid year of renovations. It features a nautical motif and is filled with fighting pirates, colorful fish, local lore and historic signs.

A great white shark has invaded Jupiter. It took six men more than one hour to “reel in” the former denizen of the deep. The enormous fish now hovers above patrons at a local watering hole.

“I am shocked and amazed, and I can’t believe it,” said Scott Thomson, managing partner of Shipwreck Bar & Grille on Old Dixie Highway. “It’s ready for the lunch crowd.”

One wall of Thomson’s popular establishment was removed the morning of March 14, 2013, in preparation for the arrival of the massive shark. A crew of six men lifted the 300-plus-pound specimen off its perch from a large trailer parked outside and carried it through the side of the building toward the bar. There, they hoisted it into the air using ropes and chains and a 10-foot ladder.

“That fish is awesome,” said Gary Day, an employee at Shipwreck Bar & Grille.

“It’s the size of a Suburban,” said Rob Thomson, managing partner of Waterfront Properties and Club Communities. “Even if we took the doors off, we couldn’t get it through.”

The new decorative addition to the family-friendly Shipwreck Bar & Grille marks the return of the great white shark to its rightful place after a 12-year absence. Years ago, when the parcel of land in Jupiter housed the storied Jupiter Crab Co. restaurant, it, too, had a great white looming overhead.

“Everybody knew Jupiter Crab Co., and at the time, there was a great white shark hanging over the bar,” Rob Thomson said. “It used to be kind of a cool place to go.”

Shipwreck Bar & Grille re-opened four months ago after a solid year of renovations. It features a heavy nautical motif and is filled with fighting pirates, colorful fish, local lore and historic markers and signs. There also is a miniature museum inside the restaurant, with information about the shipwreck San Miguel de Archangel and its search site off Jupiter Island.

The Shipwreck Bar & Grille shark has a long history in Jupiter following its capture in 1986, by Frank Mundus and Donnie Braddick. The duo reeled in the 3,427-pound fish about 28 miles off Montauk, N.Y. The International Game Fishing Association ruled the catch the largest great white caught by rod-and-reel. At the time it was caught, it was a word record.

Richard Black, owner of Grand Slam Sportfishing Supply, acquired the behemoth from a taxidermy store in Pompano Beach and mounted it atop his Chevrolet Suburban, where it stayed for three years. Black returned the creature to the taxidermy store for use in a television reality show and re-acquired it March 8. Instead of strapping it back onto his truck, he called Scott Thomson -- offering it up as restaurant décor.

“Wow,” Black said as he walked into the restaurant and saw the shark aloft. “Wow. That looks awesome.”