The Children’s Museum of Indianapolis is pairing superpowered heroes from pop culture, literature, myth, and legend to create an ultimate superpower showdown this spring break. Your vote decides whose superpower should make it to the final round; Batman®, Spider-Man®, Teenage Mutant Ninja Turtles®, Hercules, Ravana and Eagle Kachina are just a few of the options. 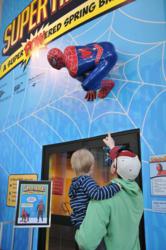 Superpowers can turn an ordinary person into the hero (or villain) of extraordinary stories... We want children to understand they are special with their own unique power to change the world however they choose.

Unique powers have transformed ordinary mortals into extraordinary heroes and villains for centuries. Arguments over which power is the best - have circulated just as long. Now you get to determine which power will prevail as the top power in the land through this unique exhibit and online voting opportunity. Voting begins March 15. Superheroes: A SuperPOWered Spring Break opens to the public March 16 at The Children's Museum of Indianapolis with continued online and onsite voting through May 5, 2013.

“The premise is to connect objects from our interesting 120,000 artifact collection that range from mythological heroes and literature to pop cultural icons on loan from movie studios and private collectors to superpowers,” said Dr. Jeffrey H. Patchen, president and CEO, The Children’s Museum of Indianapolis. “Superpowers can turn an ordinary person into the hero (or villain) of extraordinary stories. They excite and inspire us by doing things no one else can. We want children to understand they are special with their own unique power to change the world however they choose.”

Unique artifacts The Children’s Museum chose to represent amazing pop culture characters and their superpowers include:

Unique artifacts the museum chose to represent amazing characters and their superpowers from literature, mythology and legend include:

Families are invited to vote onsite or online to determine which superpowers should hold super status in the museum’s hero-to-hero and villain match ups. Everyone is also encouraged to create their own superheroes along with stories about them.

The Children’s Museum will also team up with Peyton Manning Children's Hospital at St.Vincent and The Hero Project to help build heroes... one cape at a time. A trio of community service, volunteer efforts and fundraising opportunities work together to provide "something special" for each child who spends the night at Peyton Manning Children's Hospital - a super cape! In support of this, the museum will have fleece drives on March 16 & 23 to help gather fleece to make the capes (fleece criteria preferred: blizzard fleece, patterned, minimum size of one yard).

Downtown Comics will be giving away free comic books here on March 23 starting at 10am, while supplies last. The first 2,000 kids will receive the comic books.

One America is the presenting sponsor of Super Heroes, supported by Peyton Manning Children’s Hospital at St.Vincent and AAA Insurance. Monitors provided by Sharp Business Systems.

The Children's Museum of Indianapolis is a nonprofit institution committed to creating extraordinary learning experiences across the arts, sciences, and humanities that have the power to transform the lives of children and families. For more information about The Children's Museum, visit http://www.childrensmuseum.org, follow us on Twitter @TCMIndy, Facebook.com/childrensmuseum and YouTube.

Are 12 hands better than 2, 4, 6 or 8? Find out who Ravana will face in the superpower match-up!Ravana from the Hindu story Ramayana will be pitted against Dr. Octopus of pop culture fame.

A battle of the swords pits a legendary samurai against this powerful reptile from the big screen.

Pop culture and world culture collide in a battle of power!Han Solo, Raven and Darth Maul