The latest edition of the NJCAA's 75th Anniversary Feature Series highlights the history and significance of the organization's baseball championship in Grand Junction, Colo., which has hosted the ‘JUCO’ World Series each year since 1959. 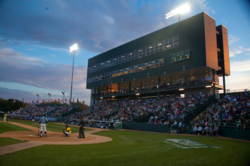 The JUCO World Series, one of the NJCAA's premiere championship events, has been held in Grand Junction since 1959.

The national headquarters of the National Junior College Athletic Association (NJCAA) has released the seventh edition of its NJCAA 75th Anniversary Feature Series. The series is one of the main items of the NJCAA’s ongoing celebration of its 75th Anniversary.

The latest article, entitled “A ‘Grand’ Place for NJCAA Baseball”, highlights the history and significance of the organizations baseball championship in Grand Junction, Colo., which has hosted the ‘JUCO’ World Series each year since 1959. Some of the biggest names in Major League Baseball history have participated in the JUCO World Series, including Hall of Famer Kirby Puckett, World Series Champion Curt Shilling and 2012 National League Rookie of the Year Bryce Harper.

The feature is available in the March 2013 edition of the NJCAA Review – the official publication of the NJCAA – and can also be accessed by visiting the special 75th Anniversary section of the organization’s website at http://www.njcaa.org/75.

To request permission to run the feature in your publication contact NJCAA Assistant Executive Director Mark Krug at mkrug(at)njcaa(dot)org.

The next installment of the NJCAA 75th Anniversary Feature Series will be released in April.

About the NJCAA
Since 1938 the National Junior College Athletic Association (NJCAA) has been the governing body of two-year college athletics, offering athletic and academic opportunities to college students. Now entering its 75th anniversary, the NJCAA is the second largest national intercollegiate athletic organization in the United States with over 500 member schools in 43 states. Each year 60,000 student-athletes compete in one of 28 different sports and the organization sponsors 48 national championship events and nine football bowl games. NJCAA Headquarters has been located in Colorado Springs, Colo., since 1985. For more information visit http://www.njcaa.org.