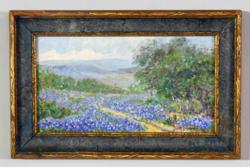 A small yet attention-grabbing painting of bluebonnets signed Julian Onderdonk took the place as top lot in the sale. The miniature painting displayed a sunny field of blue bonnets in petit impressionistic strokes. The four by seven inch painting fetched $15,600.00.

A river landscape attributed to the Hudson River School and signed Worthington Whittredge was one of the highly estimated lots of the auction. The softly lit landscape depicted fall colored trees along the bank of a river, a scene that captured the interest of the bidding audience and sold for $13,455.00.

A portrait painted on KPM porcelain in the style of Joseph Coomans fetched $12,000, the third highest price of the auction, as did a painting of a Gloucester dock by Emile Gruppe. Other noteworthy painting sales included a portrait of St. Andrew attributed to Pietro Novelli, which sold for $10,530, and a painting from the French Barbizon School entitled “Au Bord D’une Riviere” selling for $8,775.

An early nineteenth century Kentucky grandfather clock caught the interest of a number of determined bidders. The clock featured fine inlays with a moon face dial, and was originally estimated at $2,000 to $4,000. Competitive interest in the piece drove the price well above the high estimate to $11,115.

A pair of fifteenth or sixteenth century French Limoges candlesticks also sold above estimate. The uncommon bronze Limoges pieces were ornamented with light and dark blue enamel patterns. Kaminski Auctions estimated the value of the pair to be between $2,000 and $4,000, but determined phone and online bidders brought the final hammer price to $7,650.

A marble and onyx pedestal in the sale also featured eye catching enamel work. In addition to the colorful champleve enamel work, the pedestal also attracted bidders with its hand painted Sevres-type tiles that decorated the top of the marble and green onyx pedestal. This ornate pedestal went to the winning bidder for $7,650.

Many Asian items presented in the sale sold far above their original estimates. Particularly desired by online bidders was a Chinese painting on parchment depicting doves, originally valued at $300 to $400. The parchment painting ultimately sold for $5,850. A blue and white plate sold the first day of auction fetched $2,457, hundreds above the $200 to $400 estimate.

The Sunday sale, following the day of fine art, was held as a specialized DéCoR sale, dedicated to introducing buyers to antique furniture and decorative objects for the modern home. The March DéCor sale offered an exquisite selection of European decorative pieces. Stand out pieces of the day included a nineteenth century hand painted Sevres bowl with ormolu mounts, sold for $10,530, and an ivory and bronze sculpture of a woman signed F. Priess, sold for $7,897.50. A nineteenth century English covered urn also commanded bidding attention. The pate sur pate decorated urn on a Russian enameled base carried the signature of L. Solon. The highly decorative piece sold for $5,850.

The busy two-day auction brought numerous fine art collectors, dealers, and homeowners, as well as many online and phone bidders, to the Kaminski gallery. With the completion of the March Fine Art and DéCoR sale, Kaminski Auctions looks forward to another March auction on the 30th, featuring fine Asian art and antiques.