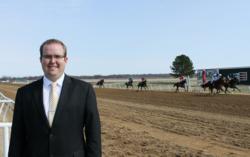 Jesse Ullery, racing secretary for Cherokee Casino Will Rogers Downs, stands in front of the outside rail during live racing at the Claremore track and casino.

“I enjoy the opportunity to be in a role where I can help not only Will Rogers Downs be successful, but also allow the horsemen to have success.”

When live racing resumed for the spring meet March 4 at Cherokee Casino Will Rogers Downs, Jesse Ullery said he felt like he was having an out-of-body experience as he watched the horses thunder around the track.

For the last five years, Ullery was the voice of Will Rogers Downs. His voice filled the casino as he offered insight on wagering before each race, and it got louder as it crackled out of the grandstand speakers as the horses changed position.

During the first day of racing, Ullery stood near the track railing quietly watching the races with the day’s race card rolled up in his hand.

He is still involved in daily racing operations, and it is in an even larger role at the Claremore race track and casino.

Ullery is the racing secretary, which means he oversees the entire racing operation. He’s in charge of writing the condition book, gathering nominations for stakes races, allotting stalls to horsemen, negotiating simulcast contracts and supervising the running of races.

“I know how important of a role I serve now, and it is not like I went away,” said Ullery. “I’m still here, and I’m still fortunate enough to be around the same group of great customers, great employees and great horsemen. I’m just serving in a different capacity.”

While Ullery was best known at the track for calling the races, during the last four years he also served as clocker and then became the assistant racing secretary prior to last year’s spring meet.

Well-known track announcer John Lies is behind the microphone during the spring meet, but a conflicting schedule with his duties at Lone Star Park means Ullery is likely to return to the booth to call races for at least a couple of days this spring.

In his new job, Ullery said his job is to make sure the races run smoothly and provide fun entertainment for those at the track and those watching it in simulcast rooms around the world.

“I enjoy the opportunity to be in a role where I can help not only Will Rogers Downs be successful, but also allow the horsemen to have success,” Ullery said. “I enjoy my new position, and I think I have the very best crew that I could possibly assemble. We all work together as a team for a common goal, and I thoroughly enjoy working with everyone here.”

The thoroughbred spring meet runs through May 18. Races begin at 1 p.m. every Monday, Tuesday and Wednesday until May, when Saturday replaces Wednesday on the schedule. Each day features 10 races.