Only Airworthy B-29 Superfortress Coming to Camarillo and Burbank 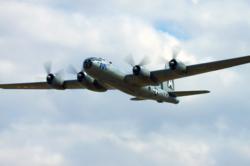 WHAT:    On March 18, 2013, FIFI, the famous B-29 Superfortress -- the only one in the world still flying -- flies into Camarillo Airport for a three day visit before moving on to Bob Hope Airport in Burbank for the weekend. This promises to be an amazing sight as this iconic World War II aircraft arrives accompanied by a P-51 Mustang, British Spitfire, Japanese Zero, Grumman Hellcat, Grumman Bearcat, C-45 Expeditor, T-6 Texan and more.

The event opens to the public Monday at 2:00 p.m., but media personnel will have advance opportunity for an exclusive and all inclusive first hand look at the aircraft and interview the crew. This event offers great visuals and interview opportunities. FIFI and her crew make a great feature story for morning or evening news. Media will have another opportunity for exclusive access on Thursday at noon when we transition to Bob Hope Airport.

The Boeing B-29 Superfortress, first flown in 1942, began active service in 1944. It is perhaps best known as the aircraft from which the first atomic bomb was dropped. It was designed as a replacement for the older B-17s and B-24s, having longer range and greater bomb loads; necessary for operations in the World War II Pacific theatre. The B-29 was also used in the Korean War in the early 1950s and was a staple of the U.S. Air Force until the late 1950s.

The airplanes will be on display at the CAF SoCal hangar and museum until Wednesday. On Thursday, March 21, the aircraft will transition to Burbank and remain on display until Sunday.

The aircraft will be on static display and giving rides throughout their stay. More information for booking a ride can be found at http://www.AirPowerTour.org.

FIFI is scheduled for arrival at approximately 12:00 p.m. – All media should arrive by 11:00 a.m. to allow enough time for set up and to ensure you won’t miss the arrival. There are limited opportunities for members of the media to fly in some of the airplanes. Please contact Kim Pardon for additional information.

Some highlights of the event:

FIFI is scheduled for arrival at approximately 12:00 p.m. – All media should arrive by 11:00 a.m. to allow enough time for set up and to ensure you won’t miss the arrival. There are limited opportunities for members of the media to fly in some of the airplanes. Please contact Kim Pardon for additional information.

B-29 cockpit tours are FREE with paid admission. These tours are only available when the aircraft is not in motion. This is generally from 12:00 am to 6:30 p.m. on days where B-29 ride flights are scheduled.

More information for booking a ride can be found at http://www.AirPowerTour.org.

ABOUT THE CAF’s B-29 SUPERFORTRESS, FIFI:
FIFI was acquired by the CAF in the early 1970s when a group of CAF members found her at the U.S. Navy Proving Ground at China Lake, California where she was being used as a missile target. The airplane was rescued and restored and flew for over thirty years until 2006 when the chief pilot made the decision to ground her pending a complete power plant re-fit. What followed was an extensive four year restoration that included replacing all four engines with new custom built hybrid engines. FIFI returned to the sky in 2010 and since that time has traveled coast to coast attracting large crowds at every tour stop. Learn more about FIFI and her tour schedule at http://www.AirPowerTour.org.

ABOUT THE COMMEMORATIVE AIR FORCE:
Collecting, restoring and flying vintage historical aircraft for more than half a century, the Commemorative Air Force ranks as one of the largest private air forces in the world. The CAF is dedicated to Honoring American Military Aviation through flight, exhibition and remembrance. A non-profit educational association, the CAF has more than 9,000 members and a fleet of 156 airplanes distributed throughout the country to 72 units located in 27 states for care and operation. For more information, visit http://www.commemorativeairforce.org.