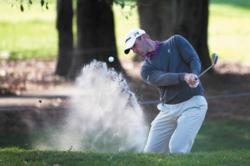 At the Tampa Bay Championship on Thursday, conditions were anything but ideal for a good round. It was cold and windy, and the weather was keeping many scores high. Except for one, unlikely rookie golfer who shot a 6-under 65 to take a two shot lead over pro Brian Harman. It was Shawn Stefani’s first competitive round on the Copperhead Course. He played a bogey free round, and had three birdies on each of the front nine and back nine. His 65 round was a tie for his lowest of the season. Stefani did very little wrong and made very few mistakes. His short game was impeccable and his putts were solid. (http://espn.go.com/golf/story/_/id/9053999/shawn-stefani-leads-pga-tour-tampa-bay-championship)

There are a few more tournaments before the Masters on April 11. Next week is the Arnold Palmer Invitational, where we will see veteran pros like Woods, Watson, and Snedeker battle it out for another win. As of March 13, Stefani has not committed to the tournament yet. Be sure to check out Masterstickets.co for updates on the Masters and get your tournament passes here as well.