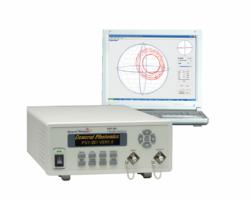 Our original PSY-101 was one of our best-selling products. The new version offers much faster measurement and expanded stabilization functions that facilitate applications such as coherent receiver testing.

General Photonics, a market leader in optical polarization measurement, announced a new Polarization Synthesizer/Analyzer for both laboratory and system use. According to General Photonics president, Dr. Steve Yao, “Our original PSY-101 was one of our best-selling products. The new version offers much faster measurement and expanded stabilization functions that facilitate applications such as coherent receiver testing.”

Technical Specifications
The PSY-201 covers either the 1460-1620nm (S, C, and L bands) or 1280-1340 wavelength ranges. It has a sampling rate of up to 2M samples/s and an analog bandwidth of 1MHz. It also has an expanded operating power range of −40 to +10 dBm. The instrument is delivered with PolaView™ software for real-time graphical representation of data on a Poincaré sphere or in a real-time virtual oscilloscope. It can be controlled either from the front panel or remotely via USB, Ethernet, RS-232 or GPIB interfaces. In addition, it has four user-configurable analog monitor voltage outputs to monitor DOP, Stokes parameters, or power level.

Like all of the 200-series instruments, it has an OLED graphic display, ergonomic keypad, and universal power supply.

Pricing and Availability
The PSY-201 will be demonstrated at OFC/NFOEC at the Anaheim Convention Center. Visitors to the event may stop by General Photonics' booth #2650 for a product demonstration March 19-21, 2013 during show hours. The instrument will be available in 12 to 14 weeks. Purchasing details and additional specifications can be made available by contacting General Photonics via email at sales(at)generalphotonics(dot)com.

About General Photonics
Founded in 1995, General Photonics is an award-winning manufacturer of advanced optical polarization modules and instruments. The company holds numerous patents on photonic designs, and its staff has authored a number of published articles on polarization and delay control. Customers include research organizations, manufacturers of communication systems, aerospace companies and medical system manufacturers.

The company is privately held, with headquarters and manufacturing facilities in Southern California. A design, engineering and technical support center is located in Beijing, China. Sales worldwide are conducted through a network of distributors and representatives. More information can be found at the company’s website, http://www.generalphotonics.com.

References to corporate, product or other names may be trademarks or registered trademarks of their respective owners.