Barter Rewards, an Orlando, Florida based international barter exchange company, kick started a promotional video with the new SEO protocol Deep Rich Data, taking the views from 311 to 78,000+ in 6 days 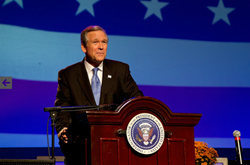 “We used taste makers and key stores back in the 90’s, I found a way to incorporate key social media nodes to effect the same result.”

On March 8, 2013, Tate Carson looked at his 3-month-old video featuring a -George W. Bush impersonator, John C. Morgan, and saw 311 total views on YouTube. “Barter Rewards is a large barter company with established reach and a dedicated website network, but we had no idea how to promote a video,” Mr. Carson said.

Tate decided to try the new social media protocol called “Deep Rich Data” to kick start the sluggish views of the video. Thomas R. Reich, developer of DRD said, “I come from a music industry background; in the past I promoted INXS, WHAM, Debbie Gibson, Yes and 60 other gold and platinum successes.” Reich continued, “We used taste makers and key stores back in the 90’s, I found a way to incorporate key social media nodes to effect the same result.”

By Monday March 11, 2013, the video “21st Century Trade Exchange” had 3400+ hits; it started to get noticed. By Wednesday, total YouTube views hit 40,000+ and on Thursday March 14, the number topped 78,000. Reich iterates, “It reminds me of the old days of the music industry really, if a product was good, you got it noticed and it took care of itself. This is a great video.”

Tom Reich, Marketing Director for BizCentral USA explains that the key to any successful promotion is a great product. “The video follows the cardinal rules of YouTube success.” Reich continues, “It is under 1 minute, funny, has accomplished talent, written well and represents a respected product.”

Tate Carson, founder of Barter Rewards said, “We were looking for a funny but wholesome spokesman for Barter Rewards. John C. Morgan fit the bill, he is the best Bush impersonator out there, and I think some may think it’s really him. It’s all in good fun.”

“I’m a Barter Rewards member myself so the fit was great,” said Orlando based actor John C. Morgan. “I will not bring George out for anything mean spirited. This was good natured and all in good fun. You can feel Bush’s values of love, country, God and family behind the jokes.”

“The key to making a video hit with big views using the Deep Rich Data method is the same as it ever was,” said Thomas R. Reich who was CEO of Cheetah Records in the 90’s, “one part talent, one part good product, one part promotion and one part luck.”