During last night’s season opener, Mikey Rush of California won the second national of his career. 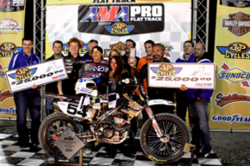 History has shown that the kickoff to the AMA Pro Flat Track Championship presented by J&P Cycles in Daytona Beach, FL is always full of surprises. This year was no exception. During last night’s season opener, Mikey Rush of California won the second national of his career. His first win came at the old Municipal Stadium short track in Daytona in 2007.

Defending 2012 AMA Pro Grand National Champion Jared Mees jumped out with the holeshot at the start of the final only to surrender the lead to Brad Baker on lap two. Then the red flags came out with a single file restart. Baker continued out front, but Rush was working his way up from a back row start. On lap 18 he made a great pass for the lead and held it to the finish with Baker and Mees finishing second and third, respectively.

In the AMA Pro J&P Cycles Pro Singles Class, Kyle Johnson took home the victory in his very first professional race. Johnson started the race with the holeshot only to have a complete restart because of a crash by last year’s series champion Stephen Vanderkuur. Johnson again nailed the holeshot with Michael Poe right behind him. Poe passed for the lead on lap three but surrendered it back to Johnson on lap 11. After that, Johnson rode like a series veteran and came home with the win. Jason Isennock worked his way into second with Poe coming home third.

About J&P Cycles:
J&P Cycles is the world’s largest retailer of aftermarket parts and accessories for Harley-Davidson and V-Twin Cruiser motorcycles. In business for 34 years, we carry a full line of products from the brands you trust: Kuryakyn, Vance & Hines, Performance Machine, Mustang Seats and many more. J&P Cycles carries tens of thousands of items in stock, in print and online, delivers the best customer service and return policy in the industry. For more information, visit http://www.jpcycles.com and start building your dream today!