Monster Energy athletes will be competing across snowboard and ski events this week in Tignes, France at the X Games Tignes 2013. 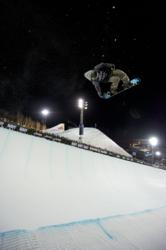 Monster Energy is proud to announce its crew of world-class athletes heading to France this week to compete in X Games Tignes 2013. The team will be competing across snowboard and ski events, with competition underway March 20-22.

X Games is truly a global endeavor for 2013 with six events in key corners of the world. Winter events include Aspen and Tignes, and the traditionally summer events are going down in Foz Do Iguacu, Brazil; Barcelona, Spain; Munich, Germany; and Los Angeles Calif.

In Tignes, Iouri “I-Pod” Podladtchikov will be looking for redemption in Men’s Snowboard Superpipe. At X Games Aspen earlier this year, he qualified first in elimination before a stomach virus hit, forcing him to withdraw from the finals. He bounced back to win The Arctic Challenge last week in Oslo and will be out for gold in Tignes. Meanwhile his Monster Energy teammate and pipe destroyer Ayumu Hirano is on a hot streak as well—the 14-year-old Japanese rider became the youngest ever to earn a Winter X medal when he took the silver in Superpipe at X Games Aspen this year and also just added youngest “Halfpipe Champion” to his record book following his second place victory at the Burton US Open Snowboarding Championships.

Joining I-Pod and Hirano on the Superpipe will be Christian Haller and the eternally stylish Kazu Kokubo.

In Women’s Snowboard Superpipe, Kaitlyn Farrington will represent Monster Energy. Her career has been solid, including silver in Aspen in 2011, gold at the first X Games Europe in 2010, and more recently the 2012 Grand Prix title.

In Women’s Snowboard Slopestyle, expect big things from Jamie Anderson. The 22-year-old has won two straight golds at X Games Aspen (three gold total; ’08, ’12, ’13), and a huge seven career medals in the discipline. Young Norwegian Silje Norendal will join her in the event.

In Men’s Snowboard Slopestyle, the field will be stacked with Monster Energy athletes including Sage Kotsenburg, Alek Ostreng, Peetu Piiroinen, and Gjermund Braaten.

Over in ski events, look out for Henrik Harlaut, a favorite to medal in Tignes. He bagged two medals at X Games Aspen two months ago (Big Air Gold and Slopestyle Silver), and is the only skier pulling nose butter double corks in competition. He’s got nose butter tricks on lock, so look for those and other tech tricks as he hits the Skiing Slopestyle course.

Joining him in Men’s Skiing Slopestyle will be Tom Wallisch, James Woods, Alex Schlopy, and Jossi Wells (alternate). Wallisch is the latest FIS slopestyle World champion and has a gnarly unnatural rodeo 1080 in his bag of tricks, and Woods took the slopestyle bronze in Aspen.

In Women’s Skiing Slopestyle, look out for Keri Herman, a skier that always seems to finish strong, including silver just two years ago in slope at X Games.

In Skiing Superpipe, Kevin Rolland returns to X Games competition now that he’s recovered from a recent ACL injury. With golds in the event in 2010 and 2011, look out for his very difficult double cork 1080 true tail grab (among other tech tricks) in his run. Joining him in the Superpipe will be Jossi Wells, David Wise, and Aaron Blunck.

Stay glued to http://www.monsterenergy.com and http://facebook.com/monsterenergy next week to score all the exclusive updates direct from Tignes. The Monster Energy crew will be loading the site constantly with behind the scenes photos, videos and contest results as they happen.