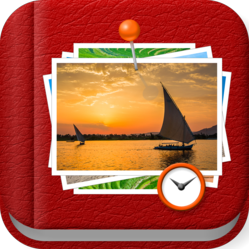 Swemos originated as a timesaving, attractive and independent way to keep track of and share your favorite experiences with friends and family.

Indie developer Develosophy is pleased to announce today's release of Swemos version 1.1 with user interface improvements, bug fixes and iPad support to the App Store. Swemos is a location-based photo journal app that allows people to easily create and customize photo albums by turning their favorite photos into personal anecdotes that can be shared with friends and family via Facebook, Twitter, email, text or Bluetooth.

The proliferation of smartphones has made it incredibly easy for mobile users to capture seemingly infinite amounts of photos and videos, but it has also left users to deal with massive unorganized media archives stored on their devices. When photo-taking mobile users need to locate one specific photo, or find photos taken at a given event, it can be difficult. Swemos, shorthand for “sweet moments”, was created to help people remember the special occasions in their lives. Favorite photos can be titled & captioned to make personal anecdotes bundled into albums. Swemos is perfect for creating and sharing photo albums of trips, weddings, family time, or everyday moments that shouldn't be forgotten.

“Swemos originated as a timesaving, attractive and independent way to keep track of and share your favorite experiences with friends and family,” said Tom Knoflook, founder of Develosophy and Swemos.

Photo albums in Swemos are completely customizable. Users create as many albums as they'd like from their favorite photos and can make every album unique with their choice of 60 stunning covers and 30 stylish paper backgrounds. Swemos users can use any of the iPhone or iPad's available fonts when customizing their albums. A personalized title and caption can be added to each photo to make a unique and memorable anecdote (a ‘swemo’). Each swemo can be shared with title, photo, caption, timestamp and location. Albums created can easily be copied from users’ devices to be backed up or shared on other devices.

On import, Swemos automatically detects when and where photos were taken. Thumbnails of photos are saved instantly after importing and can be viewed on a map to allow users to recall their special moments and remind them of places they've visited. Locations of photos can be easily adjusted by dragging them on the map.

No internet connection is required when composing anecdotes, so users are conveniently able to create and organize their albums offline and share their swemos when they are connected again.

Swemos Version 1.1 is now available for iPhone and iPad at an introductory price of $1.99.

About Swemos
Swemos, Develosophy’s first release, was developed in 2012 by programmer, wanderer and photographer, Tom Knoflook. The photo journal app ‘Swemos’(derived from ‘sweet memories’) was created to allow friends and family to create, organize and share memories through beautifully customizable and easily shareable photo albums.