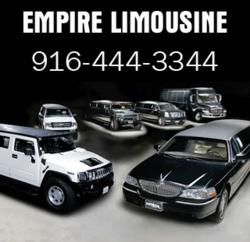 Empire Limousine is nominated for Best Limousine Service in Sacramento

Empire Limousine and Party Bus Rentals has served their customers with the highest “on time” record service for the lowest prices. Many people make use of the Empire Limousine town car service for wine-tasting tours, concerts, and other special events. Their drivers are carefully screened and thoroughly trained. These professionals are well-known for their courtesy, dependability, and discretion. That dedication to customer care has earned Empire Limousine legions of loyal and repeat clients.