Since its establishment in 2001, “Got Rum?” Magazine has been providing rum aficionados everywhere with reviews of noteworthy rums from every corner of the world. 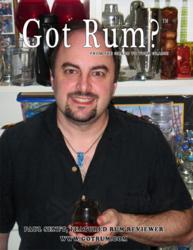 We are extremely happy to have Paul join us, he brings a new voice to the magazine, and also a new perspective on styles and approaches to quality.

The “Angel’s Share,” is the name given to the portion of the rum stored in barrels that evaporates each year, suggesting that, rather than being simply lost, it is “consumed” by the warehouse’s guardian angels.

Appropriately, “The Angel’s Share” section of “Got Rum?” magazine has seen numerous rum bottles tasted and tested over the years, all evaluations being made by magazine editors Luis and Margaret Ayala. Now, for the first time since the inception of the magazine, the Ayalas have opened up the section to showcasing reviews of other respected rum critics.

Paul Senft, founder and publisher of “Rum Journey” (http://www.rumjourney.com), attracted the attention of the Ayalas early on, thanks to the meticulous rum reviews published on his website.

After closely following Paul’s published articles, it was obvious to Luis and Margaret that Paul possessed the organoleptic skills, as well as the rum industry knowledge necessary to become a contributing member of the team.

Paul’s exploration of the rum world started with Tiki cocktails, as he learned the craft and dazzled his friends with the results. Along with his wife, Paul then began travelling throughout the rum-producing regions, learning what made some rums different from others. This passion and knowledge for rum comes across in his writings.

“We are extremely happy to have Paul join us,” said Margaret, adding that “he brings a new voice to the magazine, and also a new perspective on styles and approaches to quality.”

Paul is also a proud in-person graduate from The Rum University, having successfully completed the following courses:

In an exclusive agreement with Rum Runner Press, Paul’s rum reviews will grace the pages of “Got Rum?” magazine before being published with the rest of his work on the official Rum Journey website.

“Got Rum?” Magazine and The Rum University are registered trademarks of Rum Runner Press, Inc. Their unauthorized use is strictly prohibited.

For more information:
The Rum University
"Got Rum?" Magazine
The Rum Shop