The 5 best cycling watches of 2013 have been named by the test staff at the Heart Rate Watch Company. The list includes the Garmin 910XT, Magellan Switch Up, Garmin 310XT, Polar RCX5 Bike and Polar RC3 bike. 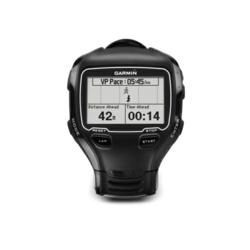 The reason to get a cycling watch, as opposed to a bike computer, is versatility because it can be used for gym workouts, running and other activities

The 5 best cycling watches of 2013 have been tested by the Heart Rate Watch Company blog test staff.

"Watches that do all cycling functions well have certainly grown in number over the past 5 years", says Rusty Squire, President of the Heart Rate Watch Company. He adds, "This year's list includes the Garmin Forerunner 910XT, Magellan Switch Up, Garmin Forerunner 310XT, Polar RCX5 and Polar RC3 Bike".

#1 - Garmin Forerunner 910XT - It does watts, speed, cadence, distance, altitude by barometric altimeter and all major cycling functions. "This watch blows 90% of all the bike computers out of the water, its that good", says Squire.

#2 - Magellan Switch Up - Built by some former Garmin employees this watch with the multi-sport mounting kit is almost better as a bike computer than it is as a watch according to Squire. "It can do power has a barometric altimeter and offers all the goods just like the Garmin 910XT".

#3 - Garmin Forerunner 310XT - It does the power output and all metrics with the exception of not having a barometric altimeter according to Squire. "For the money, at $200 less than the Garmin 910XT this watch is probably the single best cycling value of the bunch", says Squire. He adds, "The top 3 are three of the only cycling watches that will do power metrics and certainly attributes to their inclusion at the top".

#4 - Polar RCX5 Bike - This watch offers perhaps the best heart rate detail and the most accurate for calories but it lacks the power aspect according to Squire. "Polar still uses WIND sensor units with this model but it still offers up good cycling data and is popular with triathletes", says Squire.

#5 - Polar RC3 Bike - This is Polar's first-ever fully integrated GPS watch and in combination with a Polar WIND cadence sensor it makes a fantastic cycling watch. "It won't do watts because Polar has never adopted ANT+ but they have been leaning more toward Bluetooth Smart", says Squire. He adds, "It will be interesting to see if any Bluetooth Smart power meters emerge".

"The reason to get a cycling watch, as opposed to a bike computer, is versatility because it can be used for gym workouts, running and other activities", says Squire.