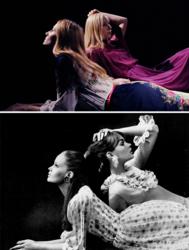 To me, Helmut Newton is vintage high fashion, and I hope that he would be proud...

They Roared, a Los Angeles based online vintage clothing shop and production company, has released a new fashion film, Helmut Roar, an homage to the world-renowned fashion photographer Helmut Newton.

“Helmut Newton has been one of my icons for years,” Tori Chesney says, “And I wanted to do something different and interesting for spring. I’m so proud of Helmut Roar. To me, Helmut Newton is vintage high fashion, and I hope that he would be proud, even though it’s on a small scale. I think these films are magical.”

Jordan and Tori began They Roared to combine their passions of vintage fashion and filmmaking. As a result, the shop focuses on using fashion films to promote their clothing. (Each film can be viewed on TRV's website.) Helmut Roar marks the sixth fashion film that Jordan Chesney has directed for They Roared Vintage, and his first short film, Jet, will be released in April.