Actor? a Documentary, a Release from DB Rich Productions, Screening at Cannes This May

Actor? a documentary, the world's first full length feature animated documentary, will be screening at Cannes this May at the Palais du Festivals. 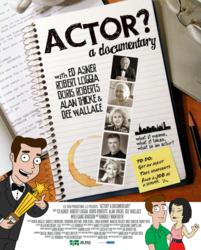 What it means, What it takes and what it is to be an actor

DB Rich Productions has announced that Actor?, a documentary, is screening at Cannes in May at the Palais du Festivals. The documentary stars Ed Asner, Doris Roberts and other acting luminaries. The documentary is done with animation, and with a run time of 76 minutes, it represents a first in documentary film making history.

"This is news because nobody has ever seen an animated documentary before," a DB Rich spokesperson said. "Can you imagine the reaction an animated documentary might have? It's unheard of!" The movie follows two animated characters, Lou and Ping, as they explore what it means to be an actor, how to do it right and what to expect. Along the way, they interview Asner and friends, four casting directors, a Hollywood agent and hundreds of actors from coast to coast. They learn what an actor does, how to improve and what it all means.

Ed Asner, a seven-time Emmy and a five-time Golden Globe Award winner, has been joined in the documentary by five-time Emmy winner, Doris Roberts; Robert Loggia, past Oscar nominee and Emmy Award nominee; Alan Thicke, past nominee for a Golden Globe Award; the Oscar-nominated Terry Moore; Dee Wallace, Wolfgang Bodison and Randolph Mantooth. Each speaks frankly about their careers in the documentary, and they give advice to up-and-coming-actors.

According to the creators, the idea behind using animation is to give the subject a new spin and instead of focusing on the fortunate few who become "stars" system, focus instead on character actors, who aren't household names but who have successful careers in supporting roles.

The creators of Actor? opted for animation because it freed them up to illustrate the stories and experiences.

At this time, several sales agents are being interviewed to determine who will represent the movie at Cannes. In addition, DB Rich Productions will be actively seeking partners for their next project, Through Maria's Eyes. The movie is based on a true story of survival against insurmountable odds.

DB Rich Productions, founded in 2008, has other films either in pre- or post-production stages. The Lighthouse, starring Danny Glover, is currently in post-production. Margarine Wars, is with their distributor Ytinfini Pictures for worldwide distribution.