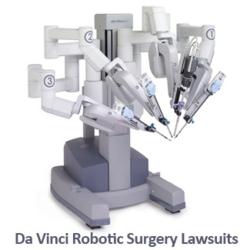 Wright & Schulte LLC, an experienced medical device law firm that is currently investigating Da Vinci robotic surgery medical malpractice lawsuits, reports that the American College of Gynecologists (ACOG) has advised its members that robotic-assisted hysterectomy should not be the first choice for most women in need of the procedure. According to a statement issued by the group on March 14th, robotic surgery is not the only or the best minimally invasive approach for hysterectomy, or the most cost-efficient. While robotic surgery may have advances in certain complex hysterectomies, studies have shown that adding this expensive technology for routine surgical care does not improve patient outcomes, the group said.
[acog.org/About_ACOG/News_Room/News_Releases/2013/Statement_on_Robotic_Surgery]

In addition to hysterectomies, Intuitive Surgical’s Da Vinci Surgical System is also widely used in prostate removals, heart surgeries, gallbladder removals and bariatric surgery. Proponents of the robot claim it offers patients less bleeding and scarring, as well as shorter recovery times compared to traditional procedures. According to the ACOG statement, many women are hearing about the claimed advantages of robotic surgery for hysterectomy, thanks to widespread marketing and advertising. The group is calling on its members to advise patients that robotic hysterectomy is best used for unusual and complex clinical conditions in which improved outcomes over standard minimally invasive approaches have been demonstrated.

This is just the latest controversy to raise questions regarding the risks and benefits associated with the Da Vinci Surgical System, according to Wright & Schulte LLC. In January, the U.S. Food & Drug Administration (FDA) launched a probe of the Da Vinci robot to determine if an increase in adverse events related to such procedures is a reflection of a real and growing problem. In February, a study published in the Journal of the American Medical Association (JAMA) questioned the overall value of robotic assisted hysterectomy. The study, which involved data on 264,758 women who had either laparoscopic or robotically-assisted hysterectomy between 2007 and 2010, found that complication rates for the two procedures were about even. However, robotic hysterectomy cost an average of $8,868/procedure, compared with $6,679 for laparoscopic surgery.

Finally, a recent Bloomberg.com report detailed 10 Da Vinci robotic surgery medical malpractice lawsuits that have been filed in the last 14 months against Intuitive Surgical by plaintiffs who allegedly suffered serious complications, including organ damage, in Da Vinci procedures. Two of those lawsuits involve deaths that were allegedly connected to the use of the robot.
[bloomberg.com/news/2013-03-05/robosurgery-suits-detail-injuries-as-death-reports-rise.html]

About Wright & Schulte LLC
Wright & Schulte LLC, a leading personal injury firm, is dedicated to the belief that America’s legal system should work for the people. Every day, the attorneys of Wright Schulte LLC stand up for the rights of people who have been injured or wronged, and fight tirelessly to ensure that even the world’s most powerful corporations take responsibility for their actions. If you’re looking for a law firm that will guarantee the aggressive and personal representation you deserve, please do not hesitate to contact Wright & Schulte LLC today. Free case evaluations are available through yourlegalhelp.com, or call 1-800-399-0795.