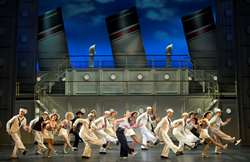 Rachel York and Company in National Tour of ANYTHING GOES

The national tour of Roundabout Theatre Company’s ANYTHING GOES, the new Broadway revival of Cole Porter’s timeless classic musical theatre masterpiece, will make its Triangle premiere March 19-24 at DPAC as part of the SunTrust Broadway, 2012 / 2013 Season. In Thursday’s performance, WTVD ABC 11’s Barbara Gibbs will take the stage in a special walk-on role as with the cast’s ensemble.

As co-anchor of the ABC 11 Eyewitness News in the morning and noon newscasts, Gibbs has covered all facets of the news, but her true passion lies in telling stories about the “positive power of the human spirit.” From heartfelt stories to taking the Broadway stage, she delves into culture and human interest with absolute fervor.

Winner of the 2011 Tony Award® for Best Revival of a Musical, Roundabout Theatre Company’s ANYTHING GOES sails direct from Broadway under the direction of Kathleen Marshall, who won the 2011 Tony Award® for Best Choreography, at the Stephen Sondheim Theatre following an opening in the spring of 2011. The New York Times calls it “a zesty new revival with knockout numbers and white-hot dancing” while the AP exclaims that it’s, “so delightful, so delicious, so de-lovely!”

Along with Barbara Gibbs, the national tour features a stellar cast of Broadway veterans and newcomers:

Cole Porter’s roundup of nostalgic hits in the production include “You’re the Top,” “Friendship,” “I Get a Kick Out of You,” “It’s De-Lovely,” “Blow, Gabriel, Blow” and, of course “Anything Goes.”

ANYTHING GOES, the 1934 musical comedy about the lovers, liars and clowns on a transatlantic cruise is “a daffy, shipshape romp!” - Variety. When the S.S. American heads out to sea, etiquette and convention head out the portholes as two unlikely pairs set off on the course to true love… proving that sometimes destiny needs a little help from a crew of singing sailors, an exotic disguise and some good old-fashioned blackmail.

The New Broadway Cast Recording of Roundabout Theatre Company’s ANYTHING GOES, nominated for a 2011 Grammy Award for Best Musical Show Album, is available on Ghostlight Records.