Since 2003, RainbowWeddingNetwork.com has produced an ongoing national tour of LGBT Wedding Expos; April 20th will mark the company’s 100th event. Beginning over thirteen years ago as a small home-based business, the lesbian-owned RainbowWeddingNetwork (RWN) has grown to become the most extensive Gay & Lesbian Wedding Resource in America. 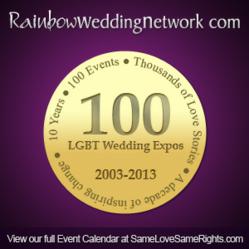 “Our goal is to create a welcoming, elegant environment for couples who are planning their ceremonies; an environment that promotes equality for the LGBT minority,” says RainbowWeddingNetwork co-founder Marianne Puechl.

Despite the oftentimes volatile national dialogue regarding marriage rights for the gay & lesbian community, RainbowWeddingNetwork.com continues to find success in bridging couples with gay-friendly wedding, travel, home and family-related companies at targeted events in states all across the country. With recent events in Baltimore and Tacoma, where LGBT couples eagerly cheered the enactment of statewide marriage legislation, and in Philadelphia, where attendees rigorously applauded President Obama’s recent endorsement of full marriage rights, Rainbow Wedding Network continues to merge aspects of historic merit along with grassroots activism in creating events that are at the same time celebratory for couples and highly productive for exhibiting businesses.

“Our goal is to create a welcoming, elegant environment for couples who are planning their ceremonies; an environment that promotes equality for the LGBT minority,” says Rainbow Wedding Network co-founder Marianne Puechl. “At the same time, we offer gay-friendly business professionals the opportunity to directly meet new clients. It’s a win-win situation.”

Rainbow Wedding Network’s first Gay & Lesbian Wedding Expo was held in Minneapolis in 2003; a second event then followed in Cambridge just 2 weeks prior to the enactment of same-gender marriage rights in the state of Massachusetts. “We’ve witnessed a great deal of history unfolding,” continues Puechl, “and the emergence of ‘Gay Weddings’ as a viable industry in our country. We’ve met so many amazing people as we’ve organized these events, and even today couples often attend with tears in their eyes.”

The upcoming Expo on Saturday April 20th will mark the company’s 100th event. Hosted by the City Winery on Varick Street in New York City, the event will feature live music, a celebratory cake-cutting ceremony, raffle giveaways and a rare appearance by both Rainbow Wedding Network founders. Over 35 select gay-friendly wedding professionals will exhibit at the event, including ceremony officiants, floral designers, deejays, photographers, cake decorators, event planners, jewelers as well as travel agents, real estate professionals and adoption agencies. Five hundred attendees are expected at the afternoon event, which is free to attend. Doors are open from 1-4pm.

The lesbian-owned RainbowWeddingNetwork.com was initially launched in 2000 and to date has assisted countless couples with their ceremony plans, and nearly 10,000 LGBT-friendly businesses reach out to the gay & lesbian wedding demographic. In 2006 the company also began publication of the nation’s first wedding magazine dedicated to same-gender couples.

“Our ongoing vision is to promote a higher degree of legitimization for the LGBT minority,” says Puechl. “This is a civil rights issue whose time has come.”