Tampa Bay Championship Is a First For Streelman - 2013 Masters Tickets and Packages for the 2013 Masters Golf Tournament at MastersTickets.co from Inside Track Tickets 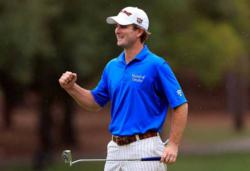 Kevin Streelman has won his first PGA Tour at the Tampa Bay Championship this past weekend. His climb to the 18th green at Innisbrook was nowhere near his challenged journey to get to where he is today. Not only did he travel non-stop cross country to play in mini tournaments, but he also cleaned clubs and caddied for extra cash on the weekends. His win on Sunday came in his 153rd start on the PGA Tour. Streelman played this weekend on the course like he had done so a million times before, making it look very easy and fluid. Getting to where he is now after winning this weekend is a dream for Streelman. All of his hard work has finally paid off, and was absolutely worth it. The victory will be sending him to the Masters in April for just the second time in his career. This win has also marked the 14th consecutive win by an American in official PGA Tour events. Can the Americans continue this streak into the Masters? Be there to find out! Get your Masters Tickets at MastersTickets.co, the lowest prices on the web and no service fees added.