How healthy offerings drive profitability is pitch at Franchising Conference in Las Vegas. 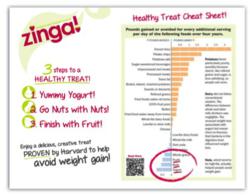 Zinga Frozen Yogurt a Healthy Treat, based on Harvard Study

Sticking to a diet doesn’t mean you have to give up a sweet frozen treat. In fact, Zinga! Frozen Yogurt is helping celebrate National Nutrition Month® in March by reminding consumers and potential franchisees alike that its basic self serve offerings promote weight loss, as reported in a Harvard study.

Here’s how a typical Zinga! Frozen Yogurt creation aided in weight loss, according to the 2011 Harvard study:

“The Multi-Unit Franchising Conference March 27-29 in Las Vegas is the perfect place to tell potential franchisees about our healthful concept,” said Zinga President John Fitchett. “Our conversations with potential franchisees start with a concept that is creative and growing and include the advantage of offering consumers a healthy frozen yogurt treat that can also be advantageous to those seeking to maintain or lose weight."

Fitchett said Zinga Franchise Group has 285 stores currently in development in 12 states and recently celebrated its 17th store opening. He projects 20 more stores to open in 2013. He added that single and multi-unit territories were available.

For more information about ZINGA and franchise opportunities, visit http://zingafroyo.com

Source for chart, study: June 23, 2011, issue of the New England Journal of Medicine.