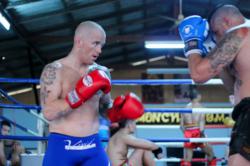 Delbrugge improves his striking in Thailand in preparation for his upcoming fights.

Cage Fury Fighting Championships (CFFC) is an American Mixed Martial Arts (MMA) organization based in New Jersey. Having promoted exclusively in Atlantic City, CFFC expanded their shows to Virginia and Delaware this past year proving to be an expansion of enormous proportions. In the last year, Cage Fury Fighting Championships has established itself as one of the top northeast Mixed Martial Arts promotions. The organization helped propel the careers of Jim Miller and Dan Miller, who both have fought in the UFC.

Derrick Kennington will come in as the hometown favorite, fighting out of Kurt Pellegrino’s school located in New Jersey. He holds a record of 6-4 and comes into the fight with plenty of cage time. He’s been a professional fighter since 2007 and has fought some of the best in Bellator including Marcin Held. This is a huge opportunity for Jon Delbrugge by being able to take on a veteran in the sport. Jon stated, “I’m very happy about this opportunity! A big thank you to Cage Fury Fighting Championships for making the fight possible and to Derrick for accepting the fight.” A win against a tough opponent such as Derrick Kennington would put Delbrugge on the radar for larger organizations such as Bellator or the UFC.

After spending a few weeks in Thailand working on his stand-up, Jon is back in training camp and getting ready for the biggest fight in his career to date. A decorated grappler with many international Jiu-Jitsu accolades, Jon is looking to show the improvements he’s made over the past few months while making a stand out impression on May 11th.

For more information on Jon Delbrugge and his career which includes fights, results and just life events check out his website http://www.jondelbruggemma.com or follow him on twitter @TheJonDelbrugge.