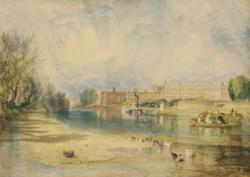 This is an extremely valuable piece, and we are proud to have a place within the history of these world-renowned works of art.

David Lerner Associates, a privately-held securities broker/dealer based in Syosset, NY, is pleased to announce the completed sale of Joseph Mallord William Turner’s watercolor 'Hampton Court Palace' (1829) for $1,666,000.00 by The Great Art Fund III, LLC for which David Lerner Associates was the sole placement agent.

“We are very pleased to have completed a successful sale of such an extraordinary painting,” said Martin Walcoe, Executive Vice President of Sales at David Lerner Associates. “This is an extremely valuable piece, and we are proud to have a place within the history of these world-renowned works of art.”

Turner, now regarded as one of the masters of British watercolor landscapes, painted 'Hampton Court Palace' to be engraved for Charles Heath’s 'Picturesque Views in England and Wales' (1827-38), a series of highly complex and allusive topographical watercolors for engraving. The painting was exhibited at the Egyptian Hall, Piccadilly in 1829, and then changed hands between several private collectors before being sold at Christie’s in 1859. 'Hampton Court' remained in the same family collection for 130 years until surfacing in Europe in 1990.

*The sale of this painting/sculpture at a profit does not necessarily indicate a similar result would occur upon the sale of other art in the fund’s portfolio.